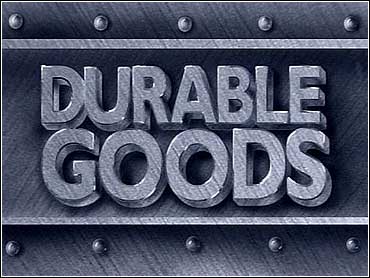 Orders to U.S. factories fell for a second straight month in September. It was another setback for manufacturing, which has seen almost 2 million jobs evaporate over the last two years and is struggling to avoid sinking even deeper into the quicksand of economic uncertainties.

The Commerce Department reported Monday that factory orders declined by 2.3 percent in September, after a 0.4 percent drop in August. September's decline marked the third decrease in the past four months.

While September's performance was better than the 3 percent decline analysts had predicted, more forward-looking data suggest a somber outlook for manufacturing.

The Institute for Supply Management reported Friday that manufacturing activity shrank in October, the second monthly drop in a row.

On the same day, the government reported that 49,000 factory jobs were lost in October, marking the 27th straight month in which manufacturing jobs were eliminated. Job losses during that period came to nearly 2 million.

"Clearly, manufacturing is suffering," said economist Clifford Waldman of Waldman Associates. "Manufacturing has lapsed from a moderate growth path into a modest recession."

Hardest hit by last year's recession, manufacturing has been the weakest link for the sputtering national economic recovery, which many analysts say is losing momentum in the current October-December quarter.

The economy, powered by consumer spending, especially on cars and other big-ticket goods, rebounded in the summer, growing at a rate of 3.1 percent. But many analysts worry that the summer boom foreshadowed a winter lull.

Pessimistic economists believe the economy will grow at around a 1 percent pace in the October-December quarter as consumers tighten their belts, worried about the economy's direction and a possible war with Iraq. The wobbly economy will be weighing on voters' minds when they vote in midterm elections Tuesday.

Growing numbers of economists believe the Federal Reserve may cut short-term interest rates for the first time this year at its next meeting Wednesday. If not, analysts say a rate cut would be likely in December.

Rates have been at four-decade lows all year long. By keeping rates low or possibly nudging them down, Fed policy-makers hope to motivate consumers and businesses to spend and invest more, helping to boost economic growth.

Consumers, whose spending accounts for two-thirds of all economic activity in the United States, have been the main force keeping the economy going this year. Some analysts worry that they might be getting tired.

Low interest rates and extra cash from a boom in mortgage refinancing have helped support consumer spending this year. On the other hand, negative factors, including the stagnant job market, eroding consumer confidence and the turbulent stock market, seem to be making consumers more cautious, analysts say.

Businesses, meanwhile, have yet to see their profits fully recover from last year's recession. Because of that, they have been reluctant to make big commitments to hiring and investment, factors restraining the recovery.

Virtually all the weakness in September's factory orders reflected slackened demand for durable goods, big-ticket items expected to last at least three years. Those orders fell by 4.9 percent, after a 1.1 percent drop in August.

For nondurable goods, such as food and clothes, orders to factories rose by 0.9 percent in September, down from a 0.5 percent increase in August.