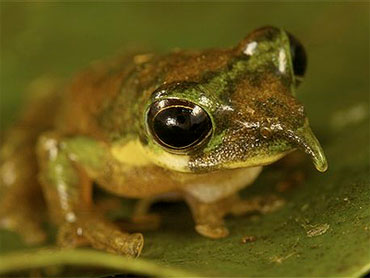 Finding a new animal species is a special moment for scientists and even better when one hops into their mountain camp and volunteers to be discovered.

An international team of researchers was camping in the Foja mountains of Indonesia when herpetologist Paul Oliver spied a frog sitting on a bag of rice in the campsite.

On closer look it turned out to be a previously unknown type of long-nosed frog. The scientists dubbed it Pinocchio, after a Walt Disney cartoon character.

When the frog is calling, its nose points upward, but it deflates when the animal is less active.

"We were sitting around eating lunch," recalled Smithsonian Institution ornithologist Chris Milensky. Oliver "looked down and there's this little frog on a rice sack, and he managed to grab the thing."

"Herpetologists (experts in snakes, lizards etc.) have good reflexes," Milensky observed. "He also caught a gecko, he managed to just jump and grab the thing" off a tree.

And mister long nose is not all they found.

Overcoming torrential rain and floods, the researchers report finding the smallest kangaroo yet, a big woolly rat, a three-toned pigeon and a gargoyle-like, bent-toed gecko with yellow eyes.

The Foja Mountains are in the western side of the island of New Guinea, a part of Indonesia that has been little visited by scientists over the years.

So the environmental group Conservation International, with the support of the National Geographic Society and Smithsonian Institution, began investigating the area. The results of their 2008 expedition were announced Monday. Milensky said the expedition was incredibly difficult.

"It was extremely wet, heavy downpours every day," he said. "The camp just turned into a complete mud bog."

Kristofer M. Helgen, curator of mammals at the Smithsonian's National Museum of Natural History, said one of the most amazing animals the researchers observed was the rare golden-mantled tree kangaroo.

Most people think of kangaroos as creatures that live on the flatlands of Australia, he said, but this one has adapted to forest life.

"It can jump into a tree and scurry right up it," Helgen said. "But on the ground it hops around like any kangaroo."

While that kangaroo had been observed, rarely, before, Helgen also discovered what may be the smallest known member of the kangaroo family, a tiny wallaby that also has adapted to forest life.

New Guinea and Australia were once connected and so have similar life forms, but they have adapted differently in each place, he explained.

The researchers say another big surprise was made by ornithologist Neville Kemp who spotted a pair of new imperial pigeons that have feathers in different parts of their body that appear rusty, whitish and gray. Other finds included a dozen new insects.

The research, which also included Indonesian scientists, was part of Conservation International's Rapid Assessment Program, in which teams come together to spend three or four weeks making surveys of the biology of selected areas.

A feature on this expedition appears in the June issue of National Geographic magazine.

"While animals and plants are being wiped out across the globe at a pace never seen in millions of years, the discovery of these absolutely incredible forms of life is much needed positive news," Bruce Beehler, a senior research scientist at CI and participant on the expedition, said in a statement.

"Places like these represent a healthy future for all of us and show that it is not too late to stop the current species extinction crisis," he said.