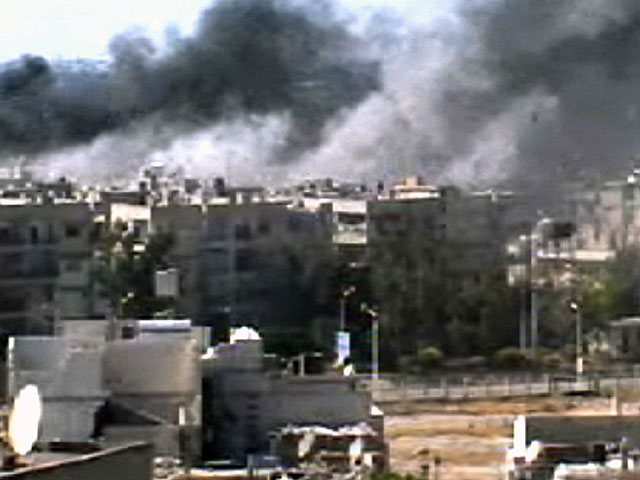 Violence in Syria has spiked in recent weeks, as both sides ignore an internationally brokered cease-fire that was supposed to go into effect April 12 but never took hold.

State Department spokeswoman Victoria Nuland said U.N. monitors and opposition forces have expressed concern that the regime was preparing for an assault in Latakia province, which could result in a "potential massacre" and where U.N. monitors have been impeded.

Speaking to reporters in Washington, Nuland said Syrian forces should remember Bosnia in the 1990s, and how the international community can find out who is responsible for abuses.

Activists reported more than 50 people killed across Syria on Monday, with violence in Homs, Idlib and Latakia provinces. According to activists' accounts, Syrian troops with helicopter gunships attacked Rastan, a rebel-held town in Homs province.

The death toll and the online videos were impossible to independently verify.

Syrian opposition rallies to a new leader
Rebels battle Syrian forces in Damascus
Video: What options does the U.S. have with Syria?

According to videos posted online, fireballs of orange flame and black rubble exploded in the air as waves of shells pounded residential buildings in Homs on Monday. The sounds of shells whooshed through the sky and there was occasional sporadic machine gun fire.

"What we are seeing right now are fierce clashes as the Syrian army tries to take back positions held by the rebels," said Rami Abdul-Rahman of the Britain-based activist group Syrian Observatory for Human Rights, which uses a network of sources on the ground.

"There are many deaths in the rebel ranks," he said.

CBS News correspondent Elizabeth Palmer, who spent Monday with U.N. observers in Homs and hotly contested areas to the city's north, reported seeing heavy fighting in the rebel neighborhood of Qaldiya. Traveling to surrounding towns, Palmer reported seeing rebel and government checkpoints in close proximity, another indication of fierce fighting from both sides.

The Assad regime argues that its ongoing assaults in cities and towns are to combat what is essentially a guerilla forces taking up arms against the government.

International envoy Kofi Annan said Monday he was "gravely concerned" about the escalation of fighting in Syria, citing the shelling of opposition areas in central Homs province and reports of mortar, helicopter and tank attacks near the Mediterranean coast.

Annan demands both sides "take all steps to ensure that civilians are not harmed," said his spokesman, Ahmad Fawzi.

The statement said he is particularly worried about shelling in Homs and reports of mortar, helicopters and tanks in the town of Haffa, in Latakia province on the Mediterranean coast.

"There are indications that a large number of civilians are trapped in these towns," the statement said.

"We are calling this out now in the hope that we can stop what could be a potential massacre," Nuland said.

Nuland declined to say if Washington or anyone else in the international community might take proactive measures.

There are no prospects for a NATO intervention like the one that helped topple Libya's Muammar Qadddafi — in part because Russia has promised to veto such a plan.

The Observatory also said a bomb targeted a security force in the northern city of Idlib, killing seven soldiers and a civilian. There was no confirmation from state media.

In Damascus, the state-run news agency SANA said authorities foiled an attempt to blow up a car rigged with 1,500 pounds of explosives in the Damascus suburb of Chebaa on Monday. Experts dismantled it, SANA said.

Syrian activists say 13,000 people have been killed since the uprising began in March 2011. The situation has grown increasingly chaotic in recent months, and it is difficult to assign blame for much of the bloodshed. The government restricts journalists from moving freely, making it nearly impossible to independently verify accounts from either side.

The bloodshed has led to broad condemnation of the regime, although Russia, Iran and China have stood by President Bashar Assad. Russia and China have vetoed two Security Council resolutions that threatened sanctions against Syria.

Russia has refused to support any move that could lead to foreign intervention in Syria, Moscow's last significant ally in the Middle East. Moscow's pro-Syria stance also is motivated by its strategic and defense ties to Damascus, including weapons sales.

"Under no circumstances can the arms supplied to Syria be used against the civilian population," Rogozin was quoted as saying by the ITAR-Tass news agency.

"Weapons do not shoot all by themselves. It is people who shoot from them. Unlike its partners, Russia has never tried to add oil to the fire," he said.

Despite Russia's strong stance, Britain's Foreign Secretary William Hague said Monday the U.K. will not rule out the use of an international military intervention.

"Each day reports emerge of savage crimes," Hague told lawmakers at the House of Commons. "The Syrian military are surrounding and bombarding towns with heavy weaponry, and then unleashing militia groups to terrorize and murder civilians in their homes. These deliberate military tactics are horrifyingly reminiscent of the Balkans in the 1990s."

He said Britain was focused on diplomatic efforts, but would "not rule out any other option which could at any stage stop the bloodshed."

The U.S. and its allies have shown little appetite for getting involved in another Arab nation in turmoil. There also is a real concern of a spillover effect for other countries in the region.

In Israel, the deputy military chief warned that Syria's large chemical weapons stocks could be trained on the Jewish state. According to Maj. Gen. Yair Naveh, Syria has the largest arsenal of chemical weapons in the world. If the Syrians had the chance, he said, they would "treat us the same way they treat their own people."

Syria has not acknowledged possessing chemical weapons, so the size of its arsenal is not known.

Israel has been watching the carnage in neighboring Syria with increasing concern. The two countries have fought major wars, and multiple attempts to reach a peace deal have failed.

On the other hand, the Israel-Syria border has been mostly quiet for decades under the regimes of Assad and his father.