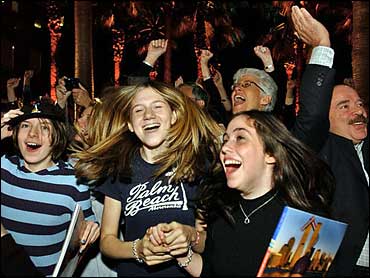 New York City flexed its financial muscle and touted its status as the "world's second home" Saturday to beat out San Francisco and become the U.S. candidate for the 2012 Summer Olympics.

On a weighted scale of voting by the 123 members of the U.S. Olympic Committee board of directors Saturday, New York received 132 points out of possible total of 223.

New York organizers, assuring the USOC that they have the resources and security to run the world's biggest show, laid out an ambitious $5 billion plan that would place virtually all events within city limits.

"We won't bring the Olympics back to the United States on the cheap," Mayor Michael Bloomberg said, contrasting the city's plan with a much lower bid by San Francisco.

The International Olympic Committee will choose the 2012 site in three years, pitting New York against such possible rivals as Paris, Moscow, Toronto, Budapest, Rome, Istanbul, Rio de Janeiro, Madrid or Seville in Spain, and a city in Germany, perhaps Berlin.

"There is no doubt this was a hard-fought contest. Congratulations to New York," IOC president Jacques Rogge said. "We look forward to receiving their bid to enter into the race to host the 2012 Olympic Games."

"We have what it takes," Giuliani said. "We absolutely love big events and we will not fail you. We will do whatever it takes to bring the Olympics back to the United States."

The biggest factor in the voting was deciding which city had the best chance to win over the IOC. The USOC, which relies heavily on a domestic Olympics to boost revenues, wants them back in the country as soon as possible.

The U.S. bid could suffer if the IOC chooses Vancouver over Salzburg, Austria, and other contenders for the 2010 Winter Games. The IOC usually prefers to move the Summer and Winter Games around the globe, and it's doubtful North America would get to host two straight Olympics.

New York City has never staged the Olympics. A San Francisco Olympics would have been the third Summer Games in California; the games were held in Los Angeles in 1932 and 1984.

New York organizers spoke of the efficiency of their plan, which centers on the "Olympic X," a design that would align venues into a cross-shaped pattern, with a high-speed ferry running north-south and commuter rail lines running east-west. The average distance would be six miles from the athletes' village, across the East River from the United Nations, to the venues. No venue would be more than 20 miles away. The triathlon would be held in its entirety in Central Park.

The New York bid still has to overcome some loud local opposition to a $1 billion proposal to convert a rail yard in Manhattan along the Hudson River into an Olympic stadium and an adjoining 8-acre plaza. The plan, opponents say, would destroy neighborhoods, displace poor and middle-income residents and saddle taxpayers with a huge bill.

Confronted with post-Sept. 11 questions about security, city officials pointed out that any Olympics is a high-security event. A highly concentrated Olympics, they claimed, would help centralize law enforcement.

"Sympathy is a strong human emotion," said San Francisco organizing committee member George Broder. "It clearly impacted the voters. How could it not?"