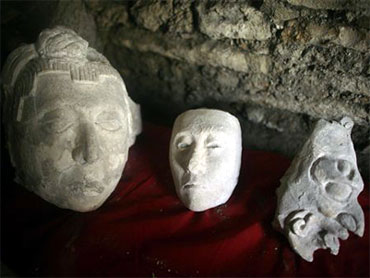 Mexican archaeologists have found an 1,100-year-old tomb from the twilight of the Maya civilization that they hope may shed light on what happened to the once-glorious culture.

Archaeologist Juan Yadeun said the tomb, and ceramics from another culture found in it, may reveal who occupied the Maya site of Tonina in southern Chiapas state after the culture's Classic period began fading.

Many experts have pointed to internal warfare between Mayan city states, or environmental degradation, as possible causes of the Maya's downfall starting around A.D. 820.

But Yadeun, who oversees the Tonina site for Mexico's National Institute of Anthropology and History, said artifacts from the Toltec culture found in the tomb may point to another explanation. He said the tomb dates to between A.D. 840 and 900.

"It is clear that this is a new wave of occupation, the people who built this grave of the Toltec type," Yadeun said Wednesday. "This is very interesting, because we are going to see from the bones who these people are, after the Maya empire."

The Toltecs were from Mexico's central highlands and apparently expanded their influence to the Maya's strongholds in southern Mexico. They are believed to have dominated central Mexico from the city of Tula - just north of present-day Mexico City - between the 10th and 12th centuries, before the Aztecs rose to prominence.

Archaeologists not connected with the dig expressed caution about drawing conclusions from one site, noting the Maya empire covered a wide area, with a varied and complex history.

"One tomb, even if it is very fancy, isn't going to answer big things about the trajectory of Maya history all over the place ... maybe locally," said David Stuart, a specialist in Mayan epigraphy at the University of Texas at Austin.

Susan Gillespie, an archaeologist at the University of Florida, said that "the whole idea of a migration of people from Tula to the Maya area has been abandoned."

The jungle-clad site is dotted with temples and platforms left by the classic Maya. The newly uncovered tomb - first detected during maintenance work in December, and later excavated and shown to reporters Wednesday - is dug into the earth at the foot of one of the older temples.

Inside, a stone bowl-type sarcophagus lies inside a narrow burrow, topped by a heavy stone lid. While such lids often bore inscriptions, this one does not; the Maya apparently began to abandon their elaborate writing system in the twilight of their culture.

Archaeologists also found a pottery urn and the bones of what they believe is a woman. Her skull appears to have been intentionally deformed, a practice common among the Maya. Physical anthropologists are now studying the bones, hoping to identify which group she came from.

The tomb does bear evidence that at least one other pre-Hispanic group took over the site after the collapse of the Maya.

The institute said the woman's bones were displaced by boiled bones in another pottery urn, apparently put there by Tzeltal chieftains sometime in the late 1400s, just before the Spanish conquest.