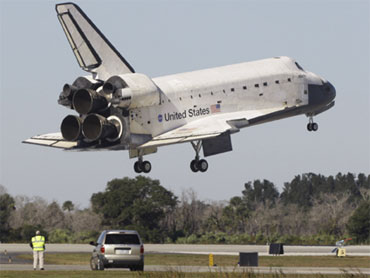 Sir Isaac Newton's famous apple tree is about to leave gravity behind.

Flying aboard space shuttle Atlantis next week will be a 4-inch sliver of the tree from which an apple fell nearly 350 years ago and inspired Newton to discover the law of gravity.

British-born astronaut Piers Sellers is flying the piece of wood for The Royal Society of London.

"I'll take it up into orbit and let it float around a bit, which will confuse Isaac," Sellers said in an interview with The Associated Press earlier this week.

When Sellers last flew in space in 2006, he carried up a gold medal that the society later presented to British physicist Stephen Hawking. This time, he told them, "What about something for you?"

The small slice of Newton's apple tree they offered is "from THE apple tree, from the one that he was looking at when the apple fell down and he got the idea," stressed Sellers.

"It's his personal apple tree ... that's really something, isn't it?"

Sellers said the president of the Royal Society assured him the piece is authentic.

"Written on it in very old 18th century lettering is I-S-dot-Newton," the astronaut told the AP. "He had a very nice hand. So I think it is his tree."

It's big enough to see the grain in the wood and is curved, he said.

Sellers will return it to the Royal Society following Atlantis' 12-day flight.

The Royal Society - the national academy of science of the United Kingdom - is celebrating its 350th year. As part of the anniversary celebration, the society in January made available online the 18th-century document detailing Newton's account of the famous apple incident, which occurred in the mid-1660s.

Here's what William Stukeley wrote as told to him by Newton:

"It was occasion'd by the fall of an apple, as he sat in contemplative mood. Why should that apple always descend perpendicularly to the ground, thought he to himself ... Why should it not go sideways, or upwards? But constantly to the earth's center? Assuredly, the reason is, that the earth draws it. There must be a drawing power in matter."

Newton was a physicist, mathematician and astronomer, among other things. He was born in 1643 in Lincolnshire, England - said to be the site of the famous apple tree. In 1687, he published his book "Principia" in which he described his theory of gravity and the laws of motion. He died in 1727.

Sellers, 55, who has a doctorate in biometeorology, became an astronaut in 1996. Born in Sussex, he's been a U.S. citizen since 1981. Next Friday's launch to the International Space Station will be his third space shuttle mission.

Sellers also is taking along a flag for the 2012 Olympics, to be held in London.