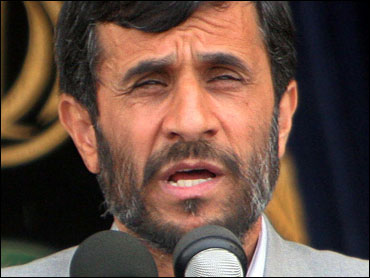 This column was written by Paul Starr.

During the early Cold War, while right-wingers called for the rollback of Soviet communism, the strategists of containment argued that the United States ought to be patient, confident that internal forces would weaken communism from within and that the "gravitational" force of a revived Western Europe would eventually draw Moscow's satellites out of its orbit. It took decades, but the strategy worked. We can only imagine the toll in human life if the advocates of rollback had been in charge and led the West into war with Russia.

Unfortunately, the people running U.S. policy today are the spiritual descendants of the right-wing promoters of rollback, and the toll from their policies grows every day. The United States was containing Saddam Hussein successfully before George W. Bush decided on a course of preventive war and regime change in Iraq. All that has happened since is a cautionary tale about American hubris. Whether the U.S. invasion will eventually succeed in bringing about regime change, we cannot say. What we have now is a regime vacuum: Creating a new Iraqi state has proved to be far more difficult than destroying the old one. And the war, instead of ending, has continued to evolve, first into an insurgency and now into sectarian strife that nearly everyone regards as civil war.

This phase, however, may not be the conflict's last. As disastrous as the war has been, the president still has the opportunity to enlarge it into an even greater catastrophe by carrying out plans that the military has been preparing for a strike against Iran. According to a report by Seymour Hersh in The New Yorker, key members of the administration believe that an air attack could not only knock out Iran's nuclear-weapons-related facilities but also destabilize its government. And because some of Iran's facilities are deep underground, Hersh reports, the administration is considering proposals to use tactical nuclear weapons.

The logic of an attack on Iran has such palpable flaws that many observers cannot believe that Bush would undertake it. Even if successful in hitting the major weapons-related sites, an airstrike would set back Iran's nuclear program only for a time while reinforcing the regime's resolve to carry it out. Our use of nuclear weapons would seemingly legitimate their use against us someday. And instead of undermining the regime, an attack would likely help consolidate its power by inflaming Iranian nationalism.

Any strike against Iran would also not end there. Iran could retaliate against the United States through its terrorist agents, and its response could include steps to strangle the world's supply of oil, thereby setting off a global economic crisis. In Iraq, Moqtada al-Sadr has already said his militia would retaliate if the United States attacks Iran. Rather than keeping the peace, American forces in Iraq would likely find themselves besieged by both of the country's major religious groups, Sunni and Shia. Well, at least we'd bring them together on that point.

Before yielding to panic over Iran, America desperately needs a dose of realism. No one likes the choices before us, but that is no reason to opt for a policy likely to trigger disastrous consequences. The United States should seek to isolate Iran's government by building alliances against it. In the end, however, unless we are prepared to invade and occupy Iran too, nothing we can do may prevent it from acquiring nuclear weapons. There may be no alternative except the policies that worked in the Cold War: deterrence, containment, and diplomacy. Yes, Iranian President Mahmoud Ahmadinejad is dangerous. So was Stalin.

In Iraq, we do have a moral obligation to try to avert full-scale civil war, but American forces haven't been able to prevent Iraq from descending into chaos, and we might better discharge our obligations by underwriting a multinational peacekeeping force, primarily Arab in composition, possibly under United Nations command. A de facto partitioning of Iraq into three autonomous regions under a weak federation may be the best outcome we can hope for.

More generally, America needs to devise an exit not just from Iraq, but from the spiral of antagonism with the Islamic world. The president has brilliantly combined lectures on the desirability of democracy in the Middle East with policies guaranteed to inflame popular majorities against us. Another preventive war would make that antagonism worse. But there is another possibility. If we can get out of the vicious cycle created by Bush's misconceived efforts to project force, the West's freedom and prosperity may begin to exert their gravitational pull. As the architects of Cold War strategy understood, those are our really powerful weapons.