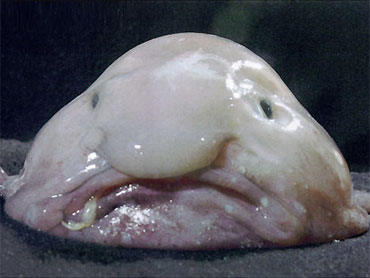 So you think you've got problems? Give thanks that you're not a blobfish.

This gelatinous deep sea fish, found in waters near the coasts of Australia and Tasmania, may not make it to the end of the century - let alone the end of the current decade. Not because the fish is winding up on diners' plates, mind you  - its "meat" is not edible - but because fishing trawlers increasingly are pulling them into their nets along with the rest of their daily hauls.

Earlier this year, marine expert Callum Roberts rang the alarm in an interview with the United Kingdom's Daily Telegraph. Even though the blobfish is rarely seen by humans - it lives about 800 meters below the ocean's surface - he said that the deep trawling fishing fleets operated by Australia and New Zealand "are some of the most active in the world so if you are a blobfish then it is not a good place to be. A very large amount of the deep sea is under threat from bottom trawling which is one of the most destructive forms of fishing."

One more strike against the blobfish: Unlike baby seals or dolphins or other sea animals deemed by humans to be "cute," this little fella is never going to win a beauty contest. Unfortunately, that means the ranks of any "save the blobfish" movement were one to spring up - likely will be limited.