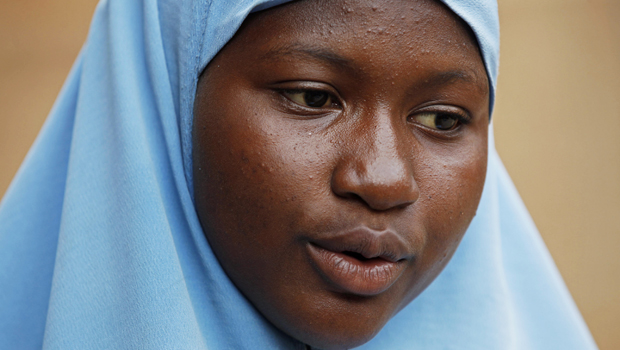 KADUNA, Nigeria - By the time she ran away, Maimuna bore the scars of a short but brutal marriage.

Her battered face swelled so much that doctors feared her husband had dislocated her jaw. Her back and arms bristled with angry welts from the whipping her father gave her for fleeing to him. She was gaunt from hunger, dressed in filthy rags. And barely a year after her wedding, she was divorced.

It would be a tragic story for a woman of any age. But for Maimuna Abdullahi, it all happened by the time she was 14.

"I'm too scared to go back home," she whispers, a frown crinkling her brow as she fiddles nervously with her hands. "I know they will force me to go back to my husband."

Maimuna is one of thousands of divorced girls in Nigeria, children who were forced into marriage and have since run away or been thrown out by their husbands. They are victims of a belief that girls should get wed rather than educated, which drew the world's attention after Boko Haram terrorists abducted more than 200 schoolgirls two months ago and threatened to marry them off. Most are still missing.

Maimuna's former husband, Mahammadu Saidu, blames her few years of school for her disobedience. A handsome man of 28 who is obviously proud of his ankle-high boots, he does not deny beating his wife.

Nigeria, a young country of about 170 million, has one of the highest rates of child marriage in the world. The law of the land states that the age of consent, and thus of marriage, is 18. However, the custom of child marriage is still ingrained enough that even a middle-aged federal senator has married five child brides and divorced at least one.

Across the country, one in five girls are married before the age of 15, according to the United Nations. In the desperately poor Muslim north, where child marriage is often considered acceptable by shariah or Islamic law, that number goes up to one in two.

This is also where Boko Haram is trying to impose its extreme version of Islam, changing the face of the region and especially of its girls. Children as young as five now hide their heads and shoulders in hijabs, a rare sight just a few years ago. Some girls become wives as early as 9.

There are no official numbers for just how many of these girls get divorced, often ending up destitute and shunned by their families. But they are all too visible. A few miles from where Maimuna lives, children her age and younger sell their bodies to truck drivers, flitting in and out of vehicles.

Maimuna was saved from this fate by Saadatu Aliyu, who has turned an old family home into a school for divorced girls. At the Tattalli Free School, which gets by on private donations, a couple of dozen girls gather in the courtyard for a sewing lesson. Toddlers mill around, the children of divorced girls who came in pregnant.

"Nobody knows how many thousands of them there are," says Aliyu of the girls. "That's why we have so many prostitutes, and very young ones, in the north."

Maimuna grew up on the outskirts of Kaduna, in a half-finished brick building on the edge of a middle-class suburb. Her father, a farmer called Haruna Abdullahi, picks up a stone and throws it at a stray dog as scrawny as he is. At 45, he's been married for 30 years and has fathered eight children.

"It's our culture to give our girls in marriage," he says in a reasoning tone. "From the age of 12, a girl can go to her husband's house."

His wife, Rabi Abdullahi, nods, and asks her husband's permission before talking. She too was a child when she married, although she does not know exactly how old.

Her life is hard, she says, but her marriage good. She insists that her husband is not a cruel man, pointing to a well he built so she did not need to walk more than a mile to collect water.

The tradition of child marriage is rooted partly in poverty. This is an area where most people do not have running water, electricity or indoor toilets, where children get only three or four years of schooling. A marriageable daughter can bring in a bride price and mean one less mouth to feed.

So in late 2012, Maimuna's father arranged to marry his eldest daughter to his best friend's eldest son. The son, Saidu, paid a dowry of $210 or 35,000 naira for Maimuna - more cash than Abdullahi has had in his life. She was 13, and he twice her age.

Saidu farms his own plot of land and owns a small motorbike, making him relatively well off and eligible. He says he has known Maimuna all his life, and waited years for her to reach what he considers marriageable age.

"When she was a kid, I would bring her candy and call her 'wifey,'" he says. "We were always meant to be together."

Saidu left his village school at fifth grade, the highest level offered, and says he regrets it. The high school was in another village, too far to walk. Now he cannot write, and must find someone else to read him even the most personal of letters.

He says he promised Maimuna she could carry on going to school, even if it meant he had to find work in town. But he also worried.

Maimuna said she did not love him and begged her father to let her stay in school. She had always been a good daughter, obedient, hard-working and popular among her friends, so her stubborn refusal to accept her marriage surprised her parents.

But her wishes were not up for discussion. Her father was clear on what counts: "It's what is good for the family and the community."

Many of Maimuna's friends from school were already married and not one was happy, but they had no idea how to escape.

Nobody prepared Maimuna for the marriage bed. There was no advice, no warning of what to expect, even from her married friends.

She settled into a new life where she felt like a slave. When she wasn't working in the fields, she was cleaning, carrying water and firewood, cooking and at the beck and call of her husband's demanding parents. Every day she was exhausted, and when she finally got to bed, her husband wanted to "bother" her, she says.

He never kept his promise to let her go to school.

When she objected to her treatment, her husband locked her into their hut, for days. He would not even allow her to visit her parents.

Maimuna bided her time until the rainy season was over and her husband went to town to find work. Nine months ago, she took off, escaping to her father and begging him to let her return home. Instead, he whipped her until her back was raw. Then he summoned her husband and forced her to go back to him.

Saidu, humiliated and furious, slapped her repeatedly in the face, jerking her head from side to side with the force of his blows. She fled once again, first to a sympathetic aunt in a nearby village and then to a cousin in Kaduna.

She now shares one cramped room with her cousin's family, just a short walk away from Tattalli school, down a dusty alley and along a road lined by open drains stinking of stagnant water.

When Maimuna showed up at the school, she had been badly beaten and refused to speak, says teacher Victoria Dung. They took her to the hospital, where doctors found she was badly malnourished. The whip marks on her back may last a lifetime.

Her husband waited the customary three months to make sure there was no baby. Then he divorced her, as a husband can do under shariah or Islamic law by declaring the divorce aloud three times. He informed her parents of the divorce in a letter dated Feb. 14, which he could not write himself.

Maimuna considers herself among the lucky ones. She balances a broken chair on a tree stump at the school to sit in front of a sewing machine, learning to make garments she can sell in the market. She thinks she'd like nursing, and wants to master English and Arabic.

"I don't know what I want to be when I grow up but, even if I get married, I want to have some education to back me up," she says in her native Hausa, with a teacher translating. "I pray that what I have done will help the younger ones, that my parents learn from the experience of my running away from home."

It is by no means certain.

After her departure, Maimuna's father called a community meeting to discuss the problem with elders. He says he knows of many girls who ran away from home because of marriages, but the elders have not yet come up with a solution.

Abdullahi denies beating his daughter, and says he is no longer angry with her. He insists he is happy that she has found a place where she can get the education she craves. Yet he gets visibly upset, the tendons in his neck standing out, as he describes the financial problem she has left him.

Maimuna's former husband is demanding back his money, but Abdullahi has spent it on land. And Saidu already has land - what he wants is cash, so he can look for another bride. Abdullahi does not know where he will find it.

Asked if he will treat his five younger daughters differently, he is ambivalent. The eyes in his chiseled face narrow, and he looks down at the ground.

"I would allow my daughters to go to school if I had the money. I have seen what happens, otherwise," he says. "But my reason is poverty, always financial problems. What can I do but give them out in marriage?"

Saidu, in the meantime, says he no longer cares for Maimuna and will move ahead with his life.

"This time I will marry a girl of 12, so that she will do what I want to do," he says. "Because if you marry a girl who is older, then she will not listen to you."

As he speaks, his eyes slide to the porch where Maimuna's 10-year-old sister, Hafsat, is cuddling a neighbor's baby. A sly smile curls his lips.