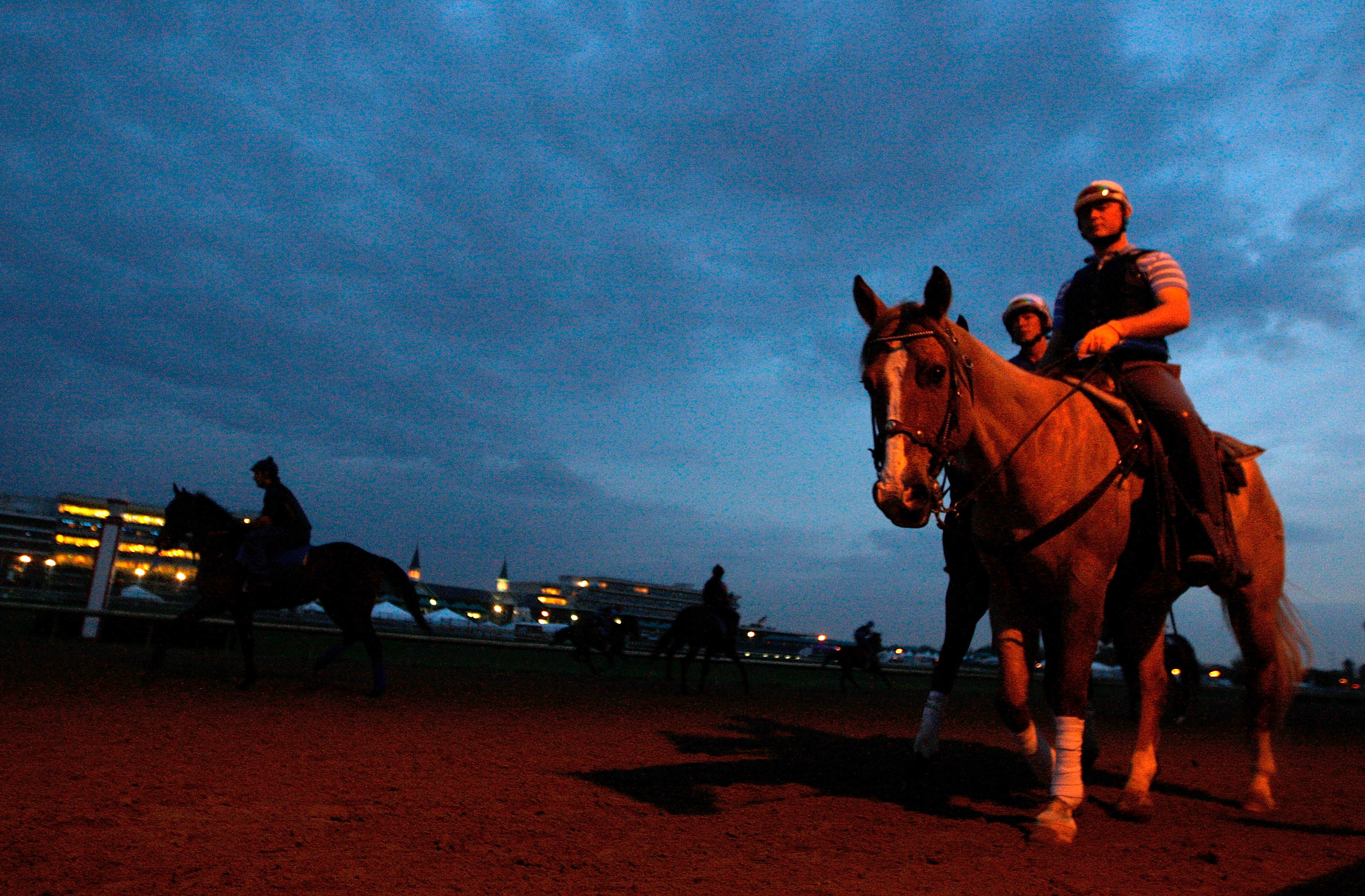 (AP) LOUISVILLE, Ky. - Horse racing under lights with the twin spires aglow. That's been the scene as Kentucky's Churchill Downs racetrack has dabbled with night racing since 2009. The results at the Louisville track have been like hitting the exacta for surging attendance and betting.

But its signature event, the Kentucky Derby to be run Saturday, is decidedly a daytime spectacle.

Track President Kevin Flanery says lights were not installed with the Derby in mind. He says the track will, in his words, "never say never," but thinks it has a good thing going with the Derby's current time slot.

Terry Bradshaw, the Hall of Fame quarterback, television analyst and horse fancier, was stunned to learn how much money Lava Man, the star pony in trainer Doug O'Neill's barn, had earned on the racetrack.

"Five million bucks that horse has won and he's walking around here?" Bradshaw said in amazement after posing for a photo Tuesday with the three-time winner of the Hollywood Gold Cup.

Lava Man is enjoying a second career at O'Neill's Southern California-based stable. The 11-year-old gelding escorts O'Neill's current runners to the track to train and race. He will accompany I'll Have Another, the Santa Anita Derby winner, to the starting gate Saturday for the Kentucky Derby.

He can certainly teach the youngsters a thing or two about the game. The former claimer became a stakes star, earning $5.2 million with seven Grade 1 victories.

Lava Man still looks fit with a well-dappled gleaming bay coat. After retiring in January 2010, he began the career transition with the help of stable foreman Sabas Rivera.

"He got lucky because he's got Sabas, who is his groom and friend," said Dennis O'Neill, Doug's brother and chief assistant. "It probably took him about six months to settle in and do his thing. We call him the `Big Dog' around here because he's like a big St. Bernard that follows Sabas around."

And he's a father figure to the rest of the barn.

"He's very mellow," Dennis O'Neill said. "He's like their dad. He leads them around and he's really good with babies. I'll Have Another and him are best buds. They go everywhere together."

Every so often, the old competitive juices flow. Lava Man started to act up during the post parade for the Santa Anita Derby, having a flashback to when he raced.

"We ran five or six horses that day and they were all nice and calm when I checked on them," Dennis O'Neill said. "Lava Man was at the front of his stall digging in. He thought he was running, and he got a little screwy out on the track. Saturday will be his biggest gig. We'll see how he handles that. He'll probably get a little wound up, so we'll have to have a Plan B."

LUKAS IN: Hall of Fame trainer D. Wayne Lukas got his wish. Optimizer will run in the Derby.

Lukas, a four-time Derby winner, was on the outside looking in until Tuesday. The top 20 Derby entrants based on graded stakes earnings are assured spots in the race. Optimizer was No. 21.

Then came news that Mark Valeski was pulling out, opening the door for Optimizer to slide into the 20th and final slot.

The addition of Optimizer means that nine of the 13 horses that ran at Churchill Downs in the Breeders' Cup Juvenile last fall will return for the Derby.

Trainer Larry Jones was unenthusiastic about running Mark Valeski and finally opted to skip the Derby in favor of the Peter Pan Stakes at Belmont Park on May 12.

The defection of Mark Valeski could mean there will be no female jockey in the Derby unless Rosie Napravnik picks up another available mount.

My Adonis now becomes the bubble horse, moving up one spot to 21st on the graded stakes list. Upon learning that Mark Valeski was out, trainer Kelly Breen loaded My Adonis onto a van at New Jersey's Monmouth Park for the trip to Kentucky.

15 FOR THE OAKS: The $1 million Kentucky Oaks on Friday, the Derby eve event for 3-year-old fillies, drew an overflow field of 15, one more than the maximum.

Oaks Lily will stand by as an also eligible. She can run if a scratch occurs early Friday morning.

Grace Hall is the 5-2 early favorite and will break from the No. 2 post, while 4-1 shot On Fire Baby drew the rail.

The other runners are listed at 10-1 odds or higher.

This is a return visit to Churchill Downs for Grace Hall, second in the Breeders' Cup Juvenile Fillies. She rolled to a 6½ length victory most recently in the Gulfstream Park Oaks. Javier Castellano will ride for trainer Tony Dutrow.