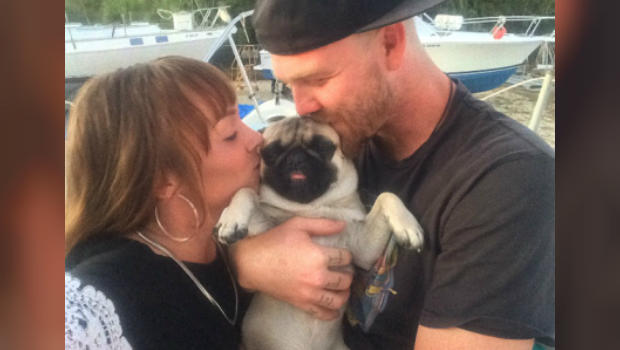 BRECKENRIDGE, Colo. -- A couple who once lived in Colorado says their life possessions were destroyed last week after the boat they lived in sank in the ocean off of Florida's coast. CBS Denver reports Nikki Walsh and Tanner Broadwell were able to grab a few items before escaping to a row boat for safety.

The main concern the couple had, after their own lives, was their pug, Remy.

"I had his life vest on him. He was shaking, he was scared," Walsh said. "I was shaking. I'm like, 'Tanner, everything we've ever had is gone. Everything we worked for is gone.'"

Walsh, Broadwell and Remy were transported back to shore.

They later returned to the ship wreck and found the 28-foot-long boat submerged in water. All of the possessions they left behind were ruined.

"There were sentimental objects that can't be replaced," Broadwell said.

The couple did not have insurance on the boat. They're unemployed, and only saved enough money to last a few months.

"It teaches you a lesson of what really matters to you," Broadwell said.

A GoFundMe account has been set up to assist the couple with removing the boat from the ocean.