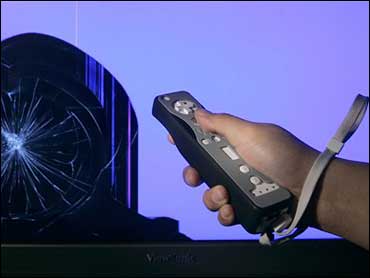 Nintendo said Friday it will replace 3.2 million straps for its popular Wii computer game controllers after receiving a rash of reports that the devices flew out of the hands of overzealous players.

The recall is a bittersweet development for Nintendo — a costly hitch in its three-way battle with Sony Corp.'s PlayStation 3 and Microsoft Corp.'s Xbox 360, but also confirmation of the enthusiastic reception worldwide.

The Wii's signature wand-like remote controller is used to mimic the motions of a tennis racket, golf club or sword, depending on the game. But soon after the Wii went on sale last month, people started reporting cases of the controller's strap breaking as they waved it about vigorously.

Nintendo will allow customers to exchange the old straps, which have a 0.024 inch diameter, for a beefed up strap that has a diameter of 0.04 inch, company spokesman Yasuhiro Minagawa said. The worldwide recall is expected to cost the company several million dollars.

"People tended to get a bit excited, especially while playing Wii sports and in some cases the control would come loose from their hands," Minagawa said. "The new strap will be almost twice as thick."

The control wand is one of the unique features of the Wii, which Nintendo introduced as its counterchallenge in a fierce competition with the PlayStation 3 and Xbox 360.

Nintendo is hoping the easy-to-control wand will appeal to a wider crowd of players — not just young men.

Nintendo has delivered more machines so far to consumers than Sony has, partly because of Sony's production problems.

Sony has promised 2 million PS3s worldwide by year's end, while Nintendo is targeting 4 million Wii units in the same period.

Separately Friday, Nintendo also recalled 200,000 AC adapters for its DS and DS Lite consoles in Japan on Friday. Nintendo said the recall would not affect adapters overseas, and officials expected only a small impact on earnings.

That recall will cost Nintendo about 100 million yen (US$1 million).