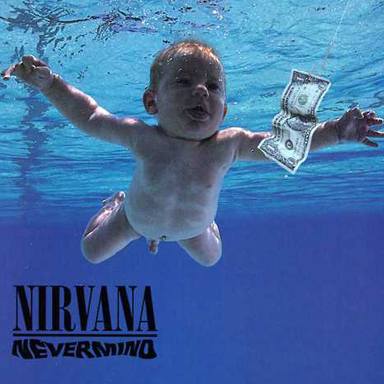 Where has the time gone?

In celebration of the 25th anniversary of Nirvana’s wildly popular album “Nevermind,” which featured a naked baby boy on its iconic cover, photographer John Chapple tracked down the newborn, who is now a 25-year-old man, and had him recreate the image.

Spencer Elden posed in a swimming pool just like he did as a newborn, and told the New York Post that he initially wanted to pose nude but Chapple “thought that would be weird.”

This isn’t the first time Elden has attempted to recreate the beloved album cover. At age 17, he participated in a similar shoot at the Rose Bowl Aquatic Center in Pasadena, California, where the first album cover was shot. In an interview with MTV at the time, he admitted that it’s an awkward feeling to know that so many people have seen him in the nude.

In 1991, Elden’s parents were reportedly paid just $200 to have their newborn son on the album cover.

Meanwhile, Nirvana frontman Kurt Cobain’s daughter Francis Bean is also all grown up, and taking after her late father. Last month, Francis posted a video of her singing a Jimmy Eat World song, and her mother Courtney Love couldn’t help but gush over the brief performance. Check it out: