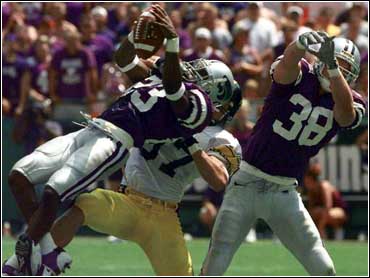 Maybe this is why Kansas State loads up with creampuffs.

Facing a non-Big 12 regular-season opponent from a major conference for the first time since 1994, the eighth-ranked Wildcats did not wrap up a 27-7 victory over Iowa on Saturday until they turned a lucky interception into Jonathan Beasley's touchdown with 5:03 to play.

More than 60,000 Wildcats fans crammed into Arrowhead Stadium despite temperatures nearing 100 degrees and probably went home wondering if this team can indeed meet its goal of challenging for the national championship.

Another worry for the Wildcats was the apparent ankle injury that put star running back and kick returner David Allen out of the game in the second half. There was no immediate word on Allen's condition.

Kansas State's first three possessions of the second half ended in turnovers against the Hawkeyes, who are coming off a 1-10 year.

David Allen's fumble led to Iowa's touchdown that made it 17-7 midway through the third quarter. Then the Hawkeyes stopped Kansas State threats with two consecutive interceptions, one in the end zone on third-and-7 from the 10.

But late in the fourth, after Iowa retained possession when Kansas State was flagged for roughing the kicker on a punt, Scott Mullen's pass bounced off the head of receiver Kevin Kasper and into the arms of cornerback Jerametrius Butler, who returned the ball 32 yards to the Iowa 15.

On third-and-3 from the 8, Beasley, Kansas State's senior quarterback, faked a pass and ran left, squeezing into the end zone.

The heavily favored Wildcats scooted 68 yards in five plays to take a 7-0 lead on their first possession, but were held out of the end zone and looked raher ragged until scoring a second TD with just 19 seconds left in the half.

With Iowa appearing to take the momentum, Beasley made an errant pitch and lost 14 yards back to his own 47. But after an incomplete pass, Iowa drew a 16-yard personal-foul penalty for a hit on Beasley's head by Grant Steen.

Suddenly, the Wildcats had new life and new energy on the Iowa 38. On third-and-7, Beasley found David Allen for 17 yards and a first down.

Then on third-and-goal from the 4, Quincy Morgan got free in the end zone for Beasley's pass, putting the Wildcats on top 17-0 with 19 seconds left in the first half.

Allen scored the first TD on a 1-yard run 4:18 into the game. Beasley and Martez Wesley combined on a 60-yard pass play that put the ball on the Iowa 2.

Rheem, who missed a 47-yard field-goal try in the second quarter, made it 10-0 late in the first half with a 24-yarder. The drive went 87 yards in 11 plays after Allen's 85-yard punt return was nullified by an illegal block.

Ladell Betts broke free up the middle for 30 yards to set up Iowa's touchdown with 7:59 left in the third quarter. On third-and- goal from the 1, Betts outran two defenders to the corner of the end zone.