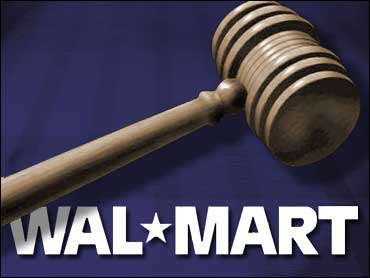 An Alameda County jury on Thursday awarded $172 million to thousands of California employees at Wal-Mart Stores Inc. who claimed they were illegally denied lunch breaks.

The world's largest retailer was ordered to pay $57 million in general damages and $115 million in punitive damages to about 116,000 current and former California employees for violating a 2001 state law that requires employers to give 30-minute, unpaid lunch breaks to employees who work at least six hours.

The jury's $172 million judgment works out to about $1,000 a worker, reports CBS News correspondent John Blackstone. In a written statement, Wal-Mart said it will appeal and said the company acknowledged it had compliance issues when California's meal break law was first enacted. But the company said it now has systems to ensure all associates receive their meal breaks. The workers' attorneys, however, said Wal-Mart continued refusing to pay for missed meals even as the case wound its way through the courts.

The class-action lawsuit in Alameda County Superior Court is one of about 40 nationwide alleging workplace violations by Wal-Mart, and the first to go to trial. The Bentonville, Ark.-based retailer, which earned $10 billion last year, settled a similar lawsuit in Colorado for $50 million.

In the lunch-break suit, Wal-Mart claimed that workers did not demand penalty wages on a timely basis. Under the law, the company must pay workers a full hour's wages for every missed lunch.

The company also said it paid some employees their penalty pay and, in 2003, most workers agreed to waive their meal periods as the law allows.

The lawsuit covers former and current employees in California from 2001 to 2005. The workers claimed they were owed more than $66 million plus interest, and sought damages to punish the company for alleged wrongdoing.

Attorney Fred Furth, who brought the case on behalf of the workers, said outside court the jury "held Wal-Mart to account."

The jury's verdict was reached after nearly three days of deliberations and four months of testimony.

The company contended that the lunch law does not allow for punitive damages because "the meal-period premiums in question are penalties, rather than wages," it said in the statement. "In short, California law prohibits penalties on top of penalties."

A spokesman did not return a call by The Associated Press for further comment.

Wal-Mart attorney Neal Manne also claimed the state law in question could only be enforced by California regulators, not by workers in a courtroom.

"We absolutely disagree with their findings," Manne said of the jury's verdict. He conceded that Wal-Mart made mistakes in not always allowing for lunch breaks when the 2001 law took affect, but said the company is "100 percent" in compliance now.

The lawsuit was initially filed by a handful of former Wal-Mart employees in the San Francisco Bay area in 2001, but it took four years of legal wrangling to get to trial.

Critics have also launched campaigns trying to stop its expansion efforts and have targeted it for giving short shrift to workers.

"It is a sad day when Wal-Mart provides these so-called low prices by exploiting their workers and even the law," Blank said.

The company added lower-cost health insurance this year after an internal memo surfaced that showed 46 percent of Wal-Mart employees' children were on Medicaid or uninsured.

A trial also is underway in Marin County Superior Court in which a group of boys were injured while riding bicycles. They claim Wal-Mart and San Rafael-based Dynacraft BSC Inc. conspired to hide defects in a key bicycle part.