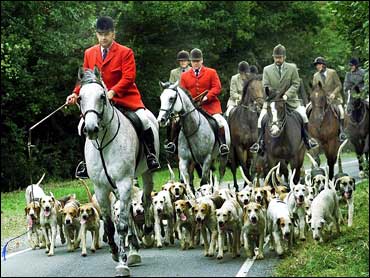 Fox hunting opponents Tuesday welcomed lawmakers' efforts to ban the sport, while hunters insisted they would fight to preserve a tradition they say is critical to rural Britain's economy.

A majority of lawmakers in the House of Commons voted Monday for an outright ban on fox hunting with hounds, rejecting a government proposal for strict controls.

The vote means legislation must now be redrafted in a Commons committee, risking a delay that could prevent the ban from reaching the House of Lords, Parliament's upper chamber, during this session of the legislature.

The vote "signaled a total end to this barbaric activity" said activist Phyllis Campbell-McRae, who urged swift passage of legislation.

"The cruelty of hunting with dogs is unacceptable in modern society," said Campbell-McRae, of the action group Campaigning to Protect Hunted Animals.

Hunters vowed to fight attempts to ban the pastime and accused lawmakers, particularly members of Prime Minister Tony Blair's ruling Labor Party, of being out touch with rural voters.

"What it shows is that Labor is utterly at odds with the countryside," said Ian Farquhar, joint master of Beaufort Hunt, with which Prince Charles regularly rides.

Blair's government believes a total ban on hunting foxes with hounds would be unenforceable, and proposed allowing the sport to continue under more stringent regulations.

But after 5 1/2 hours of debate, the Commons voted 362 to 154 to approve an amendment banning fox hunting in England and Wales. Blair did not vote.

The bill has now been sent back to a Commons committee for procedural work to incorporate the changes and should be ready for a further vote by July 17, when Parliament goes into summer recess, ministers said.

Whether the reworked bill calls for an outright ban, or even stricter control than the government had initially suggested, it will face stiff opposition in the House of Lords, which has the power to amend and delay legislation and has twice previously voted against a total ban.

While the royal family and many others delight in the time-honored spectacle of scarlet jacketed horsemen and women chasing foxes with a pack of hounds, opinion polls show most Britons oppose the practice.

Hunting supporters, who say a ban would disrupt the balance of rural life by putting thousands of people out of work, have waged a highly successful campaign.

In September, more than 400,000 countryside campaigners marched through London, sending a clear message to the prime minister. "Blair, ban hunting, we will boot you out," read placards held aloft by farmers, game keepers and hunting enthusiasts.