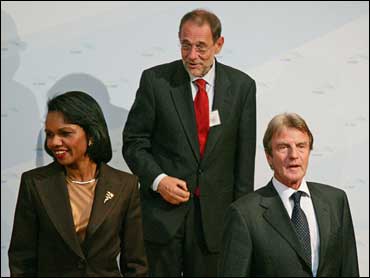 Six key nations agreed Friday to delay a new U.N. resolution that would toughen sanctions against Iran until November to see if Tehran answers questions about its suspect nuclear program.

A joint statement from the U.S., Russia, China, Britain, France and Germany said they would finalize the new resolution and bring it to a vote unless reports in November from the chief U.N. nuclear official and the European Union's foreign policy chief "show a positive outcome of their efforts."

U.N. nuclear chief Mohamed ElBaradei and Iranian officials agreed in July that Tehran would answer questions from agency experts by December on more than two decades of nuclear activity - most of it secret until revealed more than four years ago. Technical officials from the International Atomic Energy Agency returned to Tehran this week to start probing outstanding questions, some with possible weapons applications.

"We call upon Iran, however, to produce tangible results rapidly and effectively by clarifying all outstanding issues and concerns on Iran's nuclear program including topics which could have the military nuclear dimension," the statement said.

Two U.N. resolutions imposing sanctions on Iran have failed to persuade it to suspend uranium enrichment. Tehran insists its program is aimed at producing energy for civilian use, but the U.S., its European allies and many others fear the program's real goal is to produce nuclear weapons.

In a Tuesday address at the U.N. General Assembly, Iranian President Mahmoud Ahmadinejad said the nuclear issue is "closed" and vowed to defy any U.N. Security Council move for more sanctions.

The six powers reiterated their June 2006 offer of a package of economic and political rewards to Tehran, but only if it stops enrichment before the start of such negotiations - meant to achieve a long-term moratorium on enrichment.

In the joint statement, they asked Solana to meet with Iran's top nuclear negotiator, Ali Larijani, "to lay the foundation for future negotiations."

On Thursday, French Foreign Minister Bernard Kouchner said that China as well as Russia refuses to discuss possible new sanctions against Iran until the International Atomic Energy Agency reports on Tehran's past activities at the end of the year.

McCormack echoed Kouchner's comments and expressed frustration that the Chinese and Russians were holding up a new resolution.

"There have been questions the Russians have raised and the Chinese have raised, in particular, about the timing of moving forward with a sanctions resolution," he told reporters late Thursday.

"We think that we, the Security Council, should move forward with a sanctions resolution now. We would have wished that there had been a resolution by this point, but there hasn't been, unfortunately."

IAEA chief Mohamed ElBaradei and Iranian officials agreed in July that Tehran would answer questions from agency experts by December on more than two decades of nuclear activity - most of it secret until revealed more than four years ago. IAEA technical officials returned to Tehran this week to start probing outstanding questions, some with possible weapons applications.

Lavrov said Thursday night that the IAEA's progress with Iran "is obvious."

Lavrov's comments to ITAR-Tass and RIA-Novosti earlier Thursday were stronger.

"Interference by means of any sanctions would undermine the International Atomic Energy Agency's efforts," Lavrov was quoted as saying. "The U.N. Security Council measures on Iran should be balanced and respond to the steps taken by Tehran itself that obliged to answer all questions."

Rice and her top aides had hoped to capitalize on international frustration with Ahmadinejad for his recent remarks. But Lavrov said the U.S. wanted to ignore the IAEA - as it has in the past - but "we want to rely on IAEA expertise."

The U.S. ambassador to the U.N., Zalmay Khalilzad, said Thursday the agreement with the IAEA "cannot be used as a shield to protect Iran from its violation, lack of cooperation, lack of implementation of the demands of the Security Council" on the nuclear issue.

Khalilzad said that Iran's ability to enrich uranium to a level usable for weapons is a "threat to international security and stability. It is one of the most important, perhaps one of the defining issues of our time."

A united diplomatic front, he said, increases the chances that diplomacy will succeed. "Those who will not cooperate on the diplomacy of this, with regard to pressure on Iran, sanctions on Iran, bear some responsibility should diplomacy, God forbid, fail."