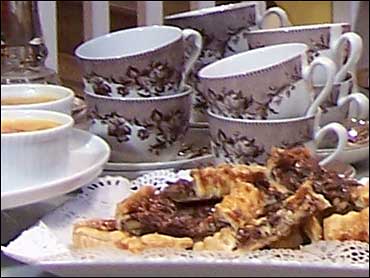 No Thanksgiving meal is complete without dessert.

Thanksgiving desserts
are just like the rest of the meal, frequently reflecting the bounty of the season.

Aromas of pumpkins, nuts, and wonderful winter spices could fill your kitchen with the two delicious (but no-sweat) recipes she suggested in the series, "The Perfect Thanksgiving."

Over several days, The Early Show joined with specialty home furnishings retailer Williams-Sonoma to tell you how to create "The Perfect Thanksgiving," step by step.

Ritchie stressed that you can achieve homemade desserts without spending your entire time in the kitchen. She believes it's OK to use some pre-made items to make your desserts.

For example, she uses a store-bought tart filling for her chocolate pecan tarts. This is a fun twist on the traditional pecan pie, and it's very simple to prepare.

We put a new twist on classic pecan pie, baking it in the shape of a tart and enriching the dessert with bittersweet chocolate. Crunchy pecans evoke the autumn harvest, and chocolate adds another layer of flavor. To speed preparation, this recipe incorporates Williams-Sonoma's ready-to-use filling, which includes mammoth pecan halves, French brandy and pure vanilla.

Divide the puff pastry in half. Roll out each piece into a 16-by-6-inch rectangle. Fit each piece into a 14-by-4-inch tart pan. Cover with plastic wrap and refrigerate until cold, about one hour. Position a rack in the lower-third of an oven and preheat to 400°F. Line the tart shells with parchment paper or aluminum foil and fill with pie weights. Bake the tart shells until the edges begin to brown, about 15 minutes. Carefully remove the parchment and weights and continue baking until the centers are golden, 7 to 10 minutes more.

Transfer the pans to a wire rack and let the tart shells cool completely, about 30 minutes. Brush the shells with the beaten egg. Reduce the oven temperature to 325°F. Remove the lid from the pecan pie filling jar. Place the jar in a large, heatproof bowl and pour enough boiling water into the bowl to come three-fourths of the way up the sides of the jar. Let stand for 15 minutes.

Carefully pour the filling into another large bowl, add the eggs, and stir until well combined. Stir in the chocolate. Divide the filling between the tart shells. Bake until the filling is puffed and just set, 15 to 20 minutes. Transfer the pans to the wire rack and let the tarts cool completely, about two hours, before serving. Accompany each slice with a dollop of whipped cream. Serves 10 to 12. From Williams-Sonoma Kitchen.

With the addition of pumpkin puree, classic crème brûlée reflects the flavors and colors of autumn. The custard is laced with warming spices, including cinnamon, allspice, ginger and nutmeg.

Preheat an oven to 300°F. Have a pot of boiling water ready. Line a shallow baking pan with a kitchen towel.

In a small saucepan over medium-low heat, warm the cream until bubbles form around the edges and steam begins to rise from the surface, about three minutes. Remove from the heat.

In a large bowl, whisk together the egg yolks, vanilla, salt, pumpkin puree, cinnamon, allspice, ginger, nutmeg and the 1/4 cup sugar until smooth and blended. Slowly pour in the cream, stirring until blended. Pour the mixture through a fine-mesh sieve set over a bowl. Divide the mixture among four 8-oz. ramekins and place in the prepared baking pan. Add boiling water to fill the pan halfway up the sides of the ramekins. Cover the pan loosely with aluminum foil and bake until the custards are just set around the edges, 25 to 30 minutes.

Transfer the ramekins to a wire rack and let cool to room temperature. Cover and refrigerate for at least four hours or up to three days.

Just before serving, sprinkle one tsp. sugar evenly over the surface of each custard. Using a kitchen torch according to the manufacturer's instructions, move the flame continuously in small circles over the surface until the sugar melts and lightly browns. Serve immediately. Serves 4.