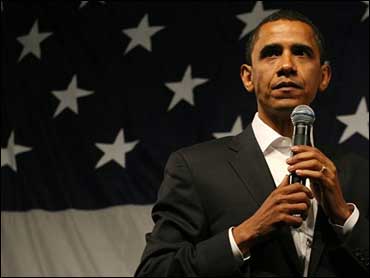 This column was written by Michael J. Petrilli.

Two weeks ago I escaped from Washington's oppressive humidity and headed with my in-laws to New Hampshire's Lake Sunapee. Like any Granite State vacationer I hoped for sunny days, cool, relaxing nights, and, of course, a visit from a major presidential candidate.

New Hampshire did not disappoint. A few days into our trip we spotted a flyer at the Sunapee Harbor announcing that none other than Senator Barack Obama would be speaking there two days hence; all were invited. Ice cream would follow. Say no more; we RSVP'd. (They needed to know how much ice cream to order.)

The big day arrived and with it a downpour. No matter. Hundreds squeezed under a small white tent set up for summer concerts. We were among the last to arrive, so we settled for a spot under an improvised tarp. Occasional leaks sent rainwater flopping down onto my wide-rimmed hat (hastily purchased moments before at the Wild Goose Country Store; I don't bring an umbrella on my vacations).

The candidate was late, of course, allowing the excitement and anticipation to build. We talked about what questions we'd ask him if we had a chance. My (liberal) sister-in-law wanted to know how he would address the nation's preeminent national security threat: global warming. My (liberal and angry) brother-in-law wanted to know whether Obama would shoot or hang Vice President Cheney after trying him for war crimes. I got the impression that their sentiments were reflective of the larger group, too.

About half an hour after the alleged starting time, the crowd began to buzz as we spotted a large bus heading our way. Alas, it was merely transporting a group of seniors to join us at the rally. But after twenty more soggy minutes, our patience was rewarded: The senator's motorcade came over a hill and into the harbor area. Obama stepped out, waved, smiled, and shook hands as he made his way to the platform.

He opened with a quip — "Isn't this a beautiful day in Sunapee?" — then launched into his ten-minute stump speech. It was eloquent but not overly inspirational, with standard talking points meant to appeal (i.e., pander) to his liberal base. "No matter what the slogans say, millions of children are being left behind," he shouted. "Don't tell me that a test score is all that matters." Our schools need more resources, he proclaimed to much applause, which drowned out (by design?) his next utterance: "and reform." He talked health care, Iraq, Social Security — all the basics — took a few questions from the audience, and started shaking hands.

My wife and I waited patiently in line, slowly snaking forward, snapping pictures of Obama and listening to him answer questions from the crowd. And then we found ourselves toward the front, and our moment of opportunity arrived. "Senator," I yelped, "how would you improve No Child Left Behind?"

A serious look crossed his face as he looked down at me from the platform. He paused ever so slightly, as if to size me up, figure out what I might want to hear, what my story might be. (I suspect he mistook me for a teacher.) And then he said confidently, "I would not reauthorize No Child Left Behind until I got the teachers' buy-in."

After spotting my quizzical look, he kept talking, filling in details. But it was all a blur — a meandering discussion of "multiple measures" and "growth models" and the unfairness of labeling schools as "needing improvement" even when they are making great progress. I thanked him and waited for a chance to shake his hand, my thoughts staying focused on his first utterance. What would it mean to get teachers' buy-in? Is that a good standard for education policy in general? And could a president actually get teachers to support NCLB without neutering it?

I've pondered, and I've concluded: Requiring teacher buy-in is not an appropriate standard for education policymaking, especially at the presidential level.

Sure, having workers' buy-in (getting input, making appropriate adjustments, and listening seriously to concerns) is ideal in any human endeavor. But when it comes to education, great principals already do this. That doesn't mean that they forge ahead only when their staff is on board, though.

At first glance, for example, many teachers instinctively hate "scientifically based reading instruction" that spells out what they should do step-by-step. But many teachers who initially opposed programs such as Open Court have turned to converts — even phonics fanatics — when they see their students making solid progress under the new regime. "Buy-in," then, can be seen as the end result of strong leadership, not a pre-condition for negotiations.

But Obama is running for president, not elementary-school principal. How could he possibly get the "buy-in" of the nation's three million-plus teachers when he'll never even meet more than a handful? The most obvious solution is to equate teacher buy-in with the support of the National Education Association and the American Federation of Teachers. But that, of course, would put the kibosh on pretty much every promising reform in the book, including much that is already underway.

What about consulting teachers directly, through polls? Here, too, the terrain is treacherous, as teachers are far from monolithic. Newer teachers, for example, are far more supportive of merit pay than veterans and are far less reliant on teachers unions (see here). Do all of them have to "buy-in" to a proposal, or just those who will be sticking around for a while? And what do you make of the fact that, according to the most recent Public Agenda survey, only 10 percent of teachers say that low academic standards and expectations are a "very serious" problem in their school (compared to 54 percent who raise such concerns about not having enough money). If raising standards is the cornerstone of any serious reform effort (and it is), then few teachers appear to be "on board."

Maybe what Obama meant to say is that he will work to change the opinion of teachers and earn their buy-in for promising reforms. Maybe, like excellent principals, he'll ask teachers to be open-minded about change and give it a try.

If that's the senator's intent, he should have answered my query by saying, "I'm going to work to get teachers to buy into important reforms, because only by raising expectations, holding schools accountable, and giving kids decent education choices will we close the gaps in our society and compete with the rest of the world." He should have told me that, even if I do look like a teacher.
By Michael J. Petrilli
Reprinted with permission from National Review Online