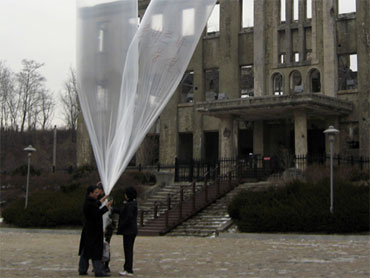 North Korea said Thursday it has detained an American man for illegally entering the country from China, the second arrest of a U.S. citizen it has reported in the past several weeks.

The man was detained Monday and is under investigation, the North's official Korean Central News Agency said in a brief dispatch. It did not identify him by name or provide other details.

In Washington, State Department officials did not immediately respond to requests for comment. The U.S. Embassy in Beijing said it had no information while the embassy in Seoul had no comment.

North Korea said late last month that it was holding another U.S. citizen for illegally entering through the North Korea-China border.

It did not identify the man, but he is widely believed to be Robert Park, an American missionary who South Korean activists say crossed over a frozen river into North Korea several days earlier to raise the issue of human rights.

U.S. officials are still seeking consular access to that citizen, U.S. State Department spokesman P.J. Crowley told reporters Wednesday. The U.S. hopes to gain access to him through the Swedish Embassy in Pyongyang since Washington does not have diplomatic ties with North Korea. The two countries are technically in a state of war since the 1950-53 Korean War ended with an armistice, not a peace treaty.

The Swedish Embassy in Pyongyang referred inquiries to the State Department in Washington.

A South Korean activist who has been the source of most information about the missionary said Thursday that he has no knowledge of the second American detainee.

Jo Sung-rae of the Seoul-based group Pax Koreana said he and fellow activists sent about 150,000 leaflets by balloon across the border into North Korea on Wednesday as part of efforts to let North Koreans know about Park.

South Korea's Unification Ministry and Foreign Ministry also said they had no information about the second detainee. The North Korean dispatch didn't say exactly where the American entered the country and police officials in the Chinese city of Dandong, at the border's western end, said they had not heard of the case.

Peter Beck, an expert on North Korea conducting research at Stanford University, said that though the circumstances of the most recent detention remain murky, he doubted that either of the cases would have a negative impact on relations between Washington and Pyongyang.

"I don't think the North is in a position to take advantage of having either of them," he said, citing in particular the case of Park, who appears to have entered the country on purpose.