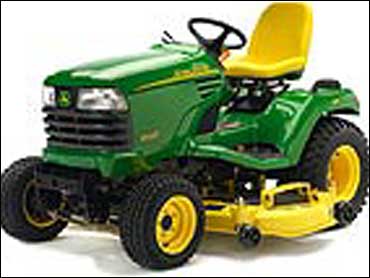 Deere & Co. posted a 27 percent decline in third-quarter profit Wednesday as the slumping global economy continued to depress sales of its tractors, bulldozers and other products. But the results easily beat Wall Street expectations.

The world's largest maker of farm equipment said it expected the biggest single-year sales drop in at least 50 years in 2009, but reiterated an annual profit forecast of $1.1 billion, bolstered by healthier anticipated sales of agricultural equipment in North America.

Deere, which also makes construction equipment, has faced dwindling demand for its products as farmers and other customers rein in spending due to tough economic conditions and weaker crop prices. Tight credit markets in some developing countries have made it difficult for potential customers to finance purchases of the company's products.

Sales of the company's equipment fell 25 percent worldwide, hurt by lower crop prices - a key driver of demand for agricultural equipment - and sagging construction activity. The decline was steepest outside North America, where sales plunged 37 percent. Equipment sales in the United States and Canada slid 16 percent.

"We have seen continued benefit from strength in the U.S. market for large farm machinery and from our efforts to keep a tight rein on costs and inventories," Deere President and CEO Samuel R. Allen said in a statement.

Deere has expanded globally in recent years, and more than half its agricultural sales came from outside North America for the first time last year. It has said further international growth remains a priority despite the economic downturn, which has hurt some emerging markets targeted by the company.

Deere repeated an earlier 2009 profit forecast of $1.1 billion despite a historic anticipated drop in sales. Equipment sales are projected to fall about 21 percent for the year and 34 percent in the fourth quarter. Fourth-quarter results will include significant production cutbacks in response to weaker retail demand, the company said.

Deere expects farm machinery sales in the U.S. and Canada to decline slightly in 2009, though sales of large tractors, combines, sprayers and seeding equipment are forecast to be higher.

Deere's yellow-and-green farm equipment remains its largest source of revenue. Sales of those products, including tractors and harvesting machines, or combines, are driven partly by crop prices, which have fallen from record levels reached last year.

Internationally, Deere sees agricultural equipment sales sliding 10 to 15 percent in Western Europe and more sharply in Central and Eastern Europe. Sales of those products in South America are due to fall 20 to 30 percent for the year.

Allen said the Moline, Ill.-based company was well-positioned to respond to the world's growing need for food, shelter, infrastructure and energy, and that it was confident in its ability to adjust production in response to shifting demand.

Turf equipment and compact utility tractor sales are projected to fall about 20 percent in North America, and sales of its construction and forestry products are seen tumbling 47 percent, according to Deere. It also forecast weaker results for its credit division.

"At first glance, we think the unchanged outlook is realistic," he wrote.

Analysts surveyed by Thomson Reuters expected a profit of 57 cents per share on revenue of $5.25 billion. Those estimates typically exclude one-time items.