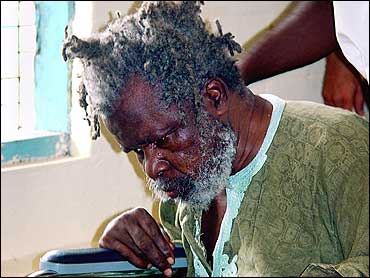 Foday Sankoh, an indicted Sierra Leone war criminal whose rebel forces were notorious for hacking off the limbs, lips and ears of civilians, died in U.N. custody at a Freetown hospital, the war-crimes court said Wednesday. He was 65.

Sankoh died late Tuesday, said David Hecht, spokesman for the U.N.-Sierra Leone war crimes court. No cause of death was given, but Sankoh reportedly suffered a mild stroke after his capture in early 2000 and had been ill and disoriented.

The court's chief prosecutor, American David Crane, said Sankoh's death from natural causes granted him "a peaceful end that he denied to so many others."

Sankoh's Revolutionary United Front, founded in Libya in 1988-89, launched the insurgency in 1991, bent on winning control of Sierra Leone's government and diamond fields.

Sankoh was captured in early 2000 after his fighters gunned down more than a dozen protesters outside his Freetown home. He had been in U.N. custody in prisons and hospitals since.

Forceful military intervention by Britain, Guinea and the United Nations crushed the rebels, and Sierra Leone formally declared the war over in early 2002 and soon held peaceful elections. Sankoh's rebel group stood candidates for parliament, but received no seats.

Sankoh, born Oct. 17, 1937, faced a 17-count indictment before the war-crimes court as well as separate charges in a Sierra Leone national court.

Authorities said in October 2002 that he suffered what they first called a mild stroke. The war-crimes court said in June it was pursuing a waiver on a U.N. travel ban against Sankoh so it could send him outside Sierra Leone for treatment.

The court's acting chief of defense, John Jones, said then that Sankoh was in a "catatonic, stuporous state."

In June 2002, in one of his last court hearings in which he spoke, the rebel leader appeared disheveled, his hair in matted white dreadlocks. His comments were rambling.

His deteriorating condition slowed proceedings, and Sankoh made his last court appearances in a wheelchair and was unable to respond to questions.

The court statement released Wednesday after Sankoh's death said prosecutors still would attempt through other war-crimes trials to establish his "involvement in the atrocious deeds that have left a legacy of horror in the minds and memories of those who survived."

Survivors include his wife, Fatou Sankoh, and at least one daughter.

News of his death was slow to break in Freetown, a city still bearing scars of the war. Sierra Leone's government refused immediate comment, noting only that Sankoh had been in U.N. custody.