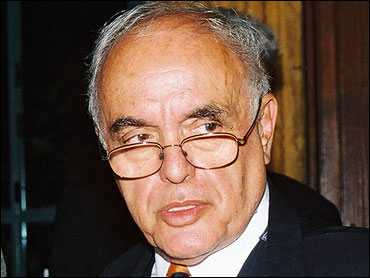 Columnist Bob Novak isn't revealing his source in the CIA leak affair, but he says he's confident President Bush knows who it is.

It was Novak who first published covert CIA officer Valerie Plame's identity, sparking a scandal that led the indictment of a top White House aide.

"I'm confident the president knows who the source is," Novak said Tuesday. "I'd be amazed if he doesn't."

Novak's remarks, reported in the Raleigh (N.C.) News & Observer, came during a question and answer session Tuesday after a speech sponsored by the John Locke Foundation, a conservative think tank.

The identity of Novak's sources has been one of the secrets in the CIA leak investigation.

"So I say, 'Don't bug me. Don't bug Bob Woodward. Bug the president as to whether he should reveal who the source is,'" Novak said.

Woodward, a Washington Post editor, revealed recently that he had also learned about Plame's identity from an administration official.

In his remarks Tuesday, Novak said his role in the leak scandal "snowballed out of proportion" because of a "campaign by the left."

He also criticized the White House for "extremely bad management" of the issue. "Once you give an issue to a special prosecutor, you lose control of it," he said.

Democratic Sen. Charles Schumer urged Mr. Bush to identify Novak's source or to say that he does not know who it is.

Mr. Bush's top political adviser, Karl Rove, is one of Novak's sources, according to people close to the investigation, but his other source is not publicly known.

Novak apparently is cooperating with the criminal investigation of Special Counsel Patrick Fitzgerald, though the journalist has never said so.

Vice President Dick Cheney's former chief of staff, I. Lewis "Scooter" Libby, is under indictment in Fitzgerald's probe on five counts of perjury, obstruction of justice and lying to the FBI. He has denied the charges.

The prosecutor has aggressively pursued contempt of court orders against reporters who have refused to cooperate and Novak is not among those who have become embroiled in court battles in the probe.

Schumer, a Democrat, urged Mr. Bush to share the identity of Novak's sources if the president knows.

"You are in a position to clear this matter up quickly," Schumer said in a letter to the president on Wednesday.

"Unlike Mr. Novak, who can claim an interest in maintaining the confidentiality of his sources, there is no similar privilege arguably preventing you from sharing this information," Schumer wrote.

"You have repeatedly suggested that you would like to get to the bottom of this affair," Schumer reminded the president. "At one point, in 2004, you suggested that anyone who was involved in leaking the name of the covert CIA operative would be fired."