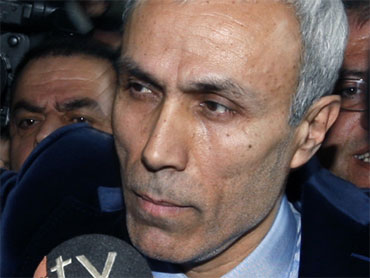 This week, the Turkish man who shot the pope in 1981 and just got out of jail drove to a police station. He wore sunglasses and was escorted by several heavyset men in suits. Inside, officers took his fingerprints with a scanner, and he applied for a passport.

Mehmet Ali Agca didn't reveal where he plans to go, though he said in prison that he wanted to visit the Vatican. He has declared himself the Messiah and renounced weapons.

One thing is clear about this gaunt, graying figure who spent years in solitary confinement, and now lives alongside Istanbul's millions: he is a riddle, and few know his next move.

Agca was convicted of killing Abdi Ipekci, the liberal advocate who held the same Milliyet post back in 1979, but escaped from prison with alleged help from extremist associates and wound up in Rome two years later, with a gun in a crowd, waiting for the pope. Ergin described Agca as a "psychopath" who might try to make money from his notorious image in Europe, and he urged the international media and community to deny him any shred of legitimacy.

Born in a poor region of rural Turkey, he told investigators that he acted alone when he wounded Pope John Paul II, then suggested Bulgaria and the Soviet Union's KGB were behind the attack. After his imprisonment ended Jan. 18, he raised his fist, predicted the end of the world and ostentatiously checked into a five-star hotel. Then he wanted some quiet.

"All the criticism in the newspapers and the uproar during his release have affected him," Yilmaz Abasoglu, one of his lawyers, said this past weekend. "He just wants to rest and keep away from it all."

If he gets his five-year passport, Agca would still need to apply for a visa to travel to most European countries. A lawyer said Agca, 52, once unsuccessfully sought citizenship from Poland, birthplace of John Paul II, who died in 2005.

Agca's lawyers won't say where he is staying, but confirm he is with his brother and other family. Some in his entourage have the same style and swagger as the now-defunct Gray Wolves, a rightist militant group to which Agca was once linked.

The Vatican has declined to comment on Agca, who has announced that he will write the "perfect" gospel. After his release from prison, he released a statement in English and Turkish that included condemnation of Abdullah Ocalan, a jailed Kurdish rebel chief who is despised by many Turks but retains backers among some in the Kurdish minority.

Agca was extradited from Italy in 2000, and he served out the remainder of his sentence for Ipekci's killing, which was reduced by amnesties and legal amendments.

Saygi Ozturk, author of a book about Agca called "Subcontractor Messiah," believes Turkish authorities will keep Agca under surveillance for a while, and that many of his alleged contacts in Turkey's underworld — a mysterious mix of nationalist extremists and organized crime heads with possible links to corrupt state agents — died long ago.

"Agca is a natural source of attention, mainly because he tells a different story every single time he is asked questions," Ozturk said. "Agca can now go ahead and say anything he wants, and there is no way we can know for sure whether he is telling the truth or not."