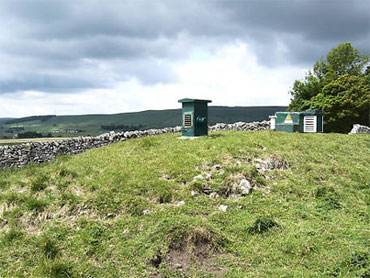 An underground Cold War nuclear bunker set in the picturesque English countryside has been sold on the auction site eBay.

The bunker was built by the Royal Observer Corps at the height of the Cold War in 1959 to monitor the anticipated spread of radiation after a nuclear blast.

Along with hundreds of other bunkers spread throughout Britain, it was decommissioned in 1991 after the collapse of the Soviet Union dramatically lowered the threat of a full-scale nuclear war.

The two-room bunker, located 15 feet beneath the ground, comes equipped with a phone, a chemical toilet and several air shafts. It is located in the Derbyshire Peak District 160 miles northwest of London.

There are two other decommissioned ROC bunkers for sale on eBay, with prices starting at around £6,000 ($9,000). The advertisements promise the buyers a unique piece of Cold War memorabilia that can be used on weekends.

Jed Dodd, who sold a ROC bunker several years ago, said some people are drawn to the bunkers but quickly lose interest.

"People buy with dreams, but they soon get disillusioned," he said. "There are not meant to be lived in, and they're in the middle of nowhere."