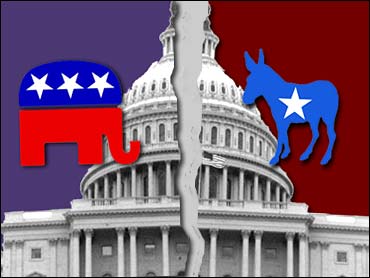 Majority Republicans are chipping away at Senate Democrats' ability to defeat a change in internal rules involving filibusters — the Democrats' most potent weapon to block GOP legislation and judicial appointees they oppose.

One Republican who has been undecided on the rule change, Sen. Richard Lugar of Indiana, said Sunday he is leaning toward supporting revives filibuster rules "when push comes to shove."

"I would not take a stand against my party's view that we should have up-or-down votes on judges and that this is a part of the filibuster thing that really needs to be settled and set aside," Lugar said in a broadcast interview.

Lugar said he hopes differences can be settled "through negotiation."

A second Republican who has been on the fence, Sen. Chuck Hagel of Nebraska, said, "I've said to both sides, don't include me in your count right now."

Senate Majority Leader Bill Frist, R-Tenn., is under pressure to force a Senate showdown before Congress breaks on May 27 for its Memorial Day recess.

It now takes 60 votes to shut down a filibuster in the Senate, which has 55 Republicans, 44 Democrats and one independent. That means 41 senators can stall a nominee.

Frist is considering a chance whereby a simple majority in the 100-member Senate can end a filibuster. Republicans can get that by mustering 50 GOP votes and bringing in Vice President Dick Cheney as the tiebreaker.

About a half-dozen GOP senators either have said they oppose or have refused to support changing the rules.

Democrats blocked confirmation on 10 of the president's first-term judicial nominees while confirming 204. The president has renominated seven of the 10, and Democrats have again threatened to employ filibusters to prevent them from coming to a final vote.

Republicans are stepping up efforts to win over wavering lawmakers. Frist plans to offer a brief videotaped speech at a rally on April 24 organized by the conservative Family Research Council. A flier for the event says "the filibuster was once abused to protect racial bias, and now it is being used against people of faith."

While not criticizing Frist's planned speech to the group, Hagel said in a broadcast interview, "When we talk religion and government, neither should become an instrument for the other. And I see drifting here in different directions that are, I don't think, healthy for our country."

The battle over judicial appointments has focused on court decisions on several issues important to religious conservatives, such as abortion, gay marriage and Terri Schiavo, the brain-damaged woman who died after her feeding tube was removed under court order.

House Majority Leader Tom Delay was a leader in congressional efforts designed to keep Schiavo alive. After her death, he implied that judges in the case should have to "answer for their behavior." He later called that comment "inartful."

The Texas Republican faces several reports of possible ethical violations that have prompted complaints from many Democrats and a few Republicans.

Republicans on the Sunday talk shows closed ranks with Delay. Rep. Roy Blunt, the Missouri lawmaker who serves as House GOP whip, said in a broadcast interview:" "I would hope he has no intention of stepping aside."

That response was noticed by Sen. Trent Lott of Mississippi, the former Senate majority leader who got little backing from Bush after some comments during a birthday celebration for the late Sen. Strom Thurmond, R-S.C., that critics interpreted as racist. The fallout cost Lott his job as Senate majority leader.

"I do think the White House needs to remember that people who fight hard for you as a candidate and for your issues as a president, deserve your aggressive support," Lott said in a broadcast interview.