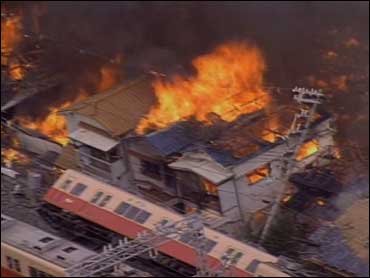 I'm Celia Hatton in Tokyo and this Letter from Asia deals with what many in Japan fear to be a disastrous combination: earthquakes and nuclear power plants.

The Japanese have faced earthquakes throughout their history… but now, there's a relatively new threat: potential fallout from quake-damaged nuclear power plants. In July's earthquake, TV images of a fire at the nearby Kashiwazaki-Kariwa power plant raised alarms across Japan. Later, officials revealed the tremors led to more than 50 problems at the site - from radioactive water leaks to cracked cooling pipes.

The power company's president apologized to the local mayor for the plant's weaknesses but insisted key safety features had worked. As soon as shaking began, he said, the reactors automatically shut down.

The explanation didn't sway the Mayor. He ordered the plant to stay closed… for now.

Anti-nuclear activist Phillip White says it's unsettling that such a large power plant - the world's biggest in terms of energy output- could suffer so much damage. "You can say, 'Well it was OK this time,' but when those systems are already breaking down, you think 'What happens when you get a bigger earthquake?'" says White.

Japan expects a serious quake every 10 years. The last major one - in Kobe in 1995 -- killed more than 6,400 people. Critics say it's impossible to guarantee a nuclear power plant can withstand such extreme tremors.

The Japanese government's reluctant to pull the plug on nuclear energy… 55 atomic energy stations supply Japan with a third of its power. Unless the Japanese public is willing to cut back, those needs aren't likely to change.

There's waste all over the place, and there are alternative forms of energy that if they really wanted to, they could develop. Geothermal energy is one possibility. But they have committed themselves to nuclear energy, in their minds and in their policies and they don't want to shift from that.

The Japanese are experts at rebuilding after earthquakes, but given the extensive damage, it's no wonder the country's nuclear plants are generating more than energy… they're creating anxiety, too.
By Celia Hatton