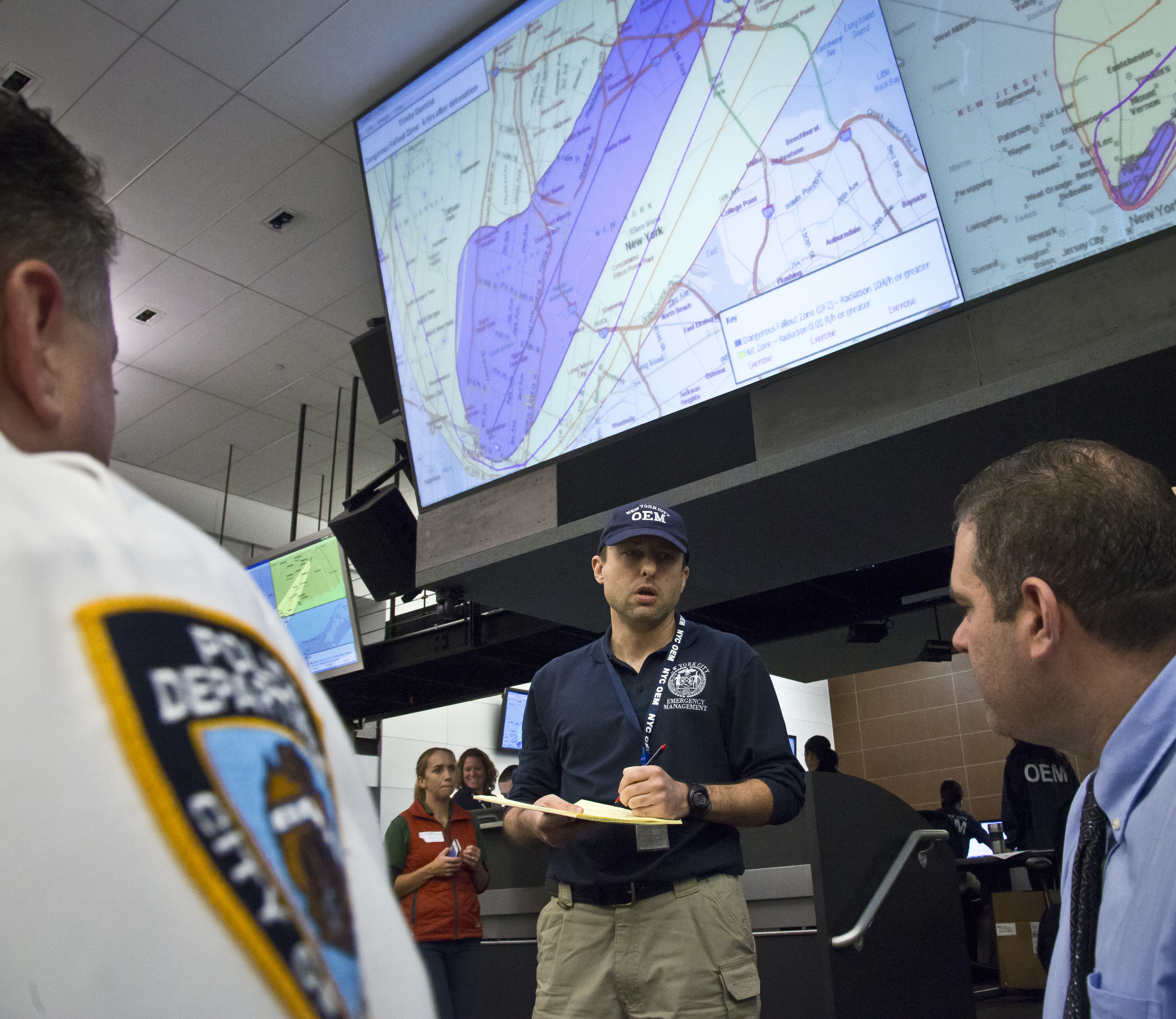 NEW YORK -- The voice over the speakers at New York City's emergency command center calmly stated the unthinkable: a nuclear explosion had gone off in Times Square.

More than 100,000 people are feared to have died instantly. A massive radiation cloud is being blown north by the wind, toward Westchester County and Connecticut. The city's subway system has been shut down and the region's cellphone service has largely failed.

"Is Washington on the phone?" said one worker outside the center's situation room. "Has the mayor arrived?" asked another.

But, despite the sense of urgency that permeated the state-of-the-art operations center, the explosion wasn't real, and midtown Manhattan was still standing.

The nightmare scenario was part of a region-wide training exercise that was conducted Wednesday by the city's Office of Emergency Management to rehearse communications with the federal government and local law enforcement agencies in New York and New Jersey.

"We wanted something that's going to challenge the system," said department Commissioner Joseph Esposito. "This is a major, major incident."

The simulation is chillingly realistic and unfolds in real-time. It purports that a 10 kiloton nuclear device -- far larger than a so-called "dirty bomb" -- has gone off on 42nd Street. Most of midtown is vaporized immediately with damage spreading throughout Manhattan.

In this scenario, the mayor survives and at first contacts the emergency management center in Brooklyn by phone, before later arriving. Other members of his inner circle are rushed to Coney Island, many miles away, to establish a new temporary seat of government.

The drill focuses on office's ability to communicate in a crisis. Its gleaming command center was built in Brooklyn a decade ago after its predecessor, which was in Seven World Trade Center, was destroyed during the September 11, 2001 terror attacks. A backup command center has also been built at an undisclosed location elsewhere in the city.

All of the city agencies have representatives under one roof, with direct links to the power companies, the transit system and Washington. In the drill on Wednesday, portions of which were open to the press, Esposito helped conduct a conference call with state officials as to the best way to decontaminate citizens exposed to radiation.

The plan would be to make Staten Island the point of entry for supplies, since Manhattan's tunnels and bridge would likely be damaged or hopelessly clogged, and to create NYPD and FDNY staging points at the far reaches of the four outer boroughs.

They also discussed how to get word to the public during the crisis if power had been lost and cell service was spotty. The solution: officials would transmit messages that could be heard on old-fashioned battery-powered radios and, in some cases, from a hazmat suit-wearing worker walking the streets with a megaphone.

"What's the message? Shelter in place, evacuate, seek medical aid. How would we do that? Social media, if it's up and running. We know a lot of this is going to be down for a time period, so we know that a big part of it would be radios," Esposito said. "The best thing would be portable radios."

Officials stressed that while not everything can be predicted in a disaster, the training exercises are vital practice.

"We all have plans: Jersey. Connecticut. The city. The state," Esposito said. "But when it actually happens, how do we communicate with one another? After 9/11, communications was down for a while. This is what we have to practice."