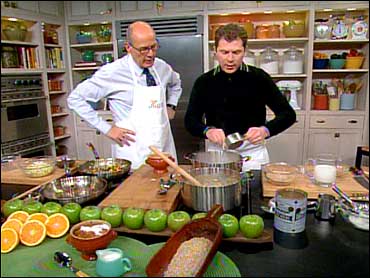 There's nothing better than hot oatmeal to start a cold winter day.

Especially when it's not bland, and made with a recipe from The Early Show's resident chef, Bobby Flay.

Instead, Flay serves up a recipe for Steel Cut Oatmeal with Sautéed Apples & Raisins and Bruleed Crust with Cinnamon Cream.

For the record, what, exactly, is oatmeal?

According to a definition in Samuel Johnson's 1755 "Dictionary of the English Language," oats were "a grain which, in England, is generally given to horses, but which in Scotland supports the people."

Since oats are by far the most nutritious of the cereal grasses, it would appear that the Scots were ahead of the rest of us.

Today, whole oats are still used as animal food. Humans don't usually consume them until after the oats have been cleaned, toasted, hulled and cleaned again, at which point they become oat groats, which still contain most of the original nutrients.

Oat groats can be cooked and served as cereal, or prepared in the same way as rice and used as a side dish or in a dish such as a salad or stuffing. When steamed and flattened with huge rollers, oat groats become regular rolled oats, also called old-fashioned oats. They take about 15 minutes to cook.

Quick-cooking rolled oats are groats that have been cut into several pieces before being steamed and rolled into thinner flakes. Though they cook in about five minutes, many think the flavor and texture are never quite as satisfying as with regular rolled oats.

Instant oats, however, aren't interchangeable, because they're made with cut groats that have been precooked and dried before being rolled. This precooking process softens the oat pieces so much that, after being combined with a liquid, the mixture can turn baked goods such as muffins or cookies into gooey lumps. Most instant oatmeal is packaged with salt, sugar and other flavorings.

Scotch oats, steel-cut oats and Irish oatmeal are all names for groats that have been cut into two to three pieces and not rolled. They take considerably longer to cook than rolled oats and have a decidedly chewy texture.

Oat flour is made from groats that have been ground into powder. It contains no gluten, however, so baked goods that need to rise, such as yeast breads, must be combined with a flour that does.

Oat bran is the outer casing of the oat and is particularly high in soluble fiber, thought to be a leading contender in the fight against high cholesterol.

Oat bran, groats, flour and Scotch oats are more likely to be found in health-food stores than supermarkets. Oats are high in vitamin B-1 and contain a good amount of vitamins B-2 and E.

1. Bring 5 cups of water to a boil in a medium saucepan over high heat.
2. Stir in the oatmeal, salt and zest and cook until the mixture begins to thicken slightly.
3. Reduce the heat to medium and continue cooking, stirring occasionally, until cooked, about 30 minutes. 4. Add the milk and sugar and stir until combined.

Whisk together ingredients until combined. Set aside.