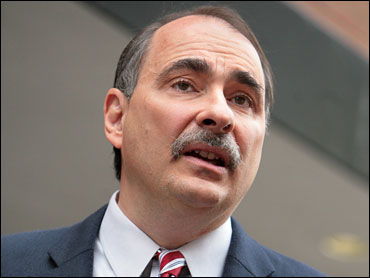 As Mr. Obama prepares for a Wednesday night speech to Congress in a risky bid to salvage his top domestic priority, political adviser David Axelrod said a public plan is not the core issue in the health care debate. White House spokesman Robert Gibbs danced around a question about whether Mr. Obama would veto a bill without the public option.

The president "believes the public option is a good tool," said Axelrod, who joined with Gibbs in a one-two punch on the Sunday talk shows. "It shouldn't define the whole health care debate, however."

Their appearances came ahead of Congress' return this week from a summer break that saw eroding public support for an overhaul and contentious town hall meetings in lawmakers' districts.

Gibbs called the government plan a valuable tool. But asked if Mr. Obama would reject legislation that didn't include it, he responded: "We are not going to prejudge where the process will be."

"I doubt we are going to get into heavy veto threats" in the president's speech, Gibbs added.

Their comments on the public plan echoed Health and Human Services Secretary Kathleen Sebelius' remarks last month that a government alternative to private insurance is "not the essential element" in revamping the system to guarantee coverage for all and try to curb unsustainable costs.

Liberals - many of whom want to do away with the private health insurance industry and replace it with Medicare for all - were furious. At the time, White House officials said Sebelius' remarks were being misinterpreted. Left unclear was Mr. Obama's bottom line.

Now it seems that Mr. Obama and his top aides are coming around to the view that a public plan is not essential. On a call with prominent liberal House members Friday, Mr. Obama refused to be pinned down on the issue, a participant told The Associated Press.

Independents who helped propel Mr. Obama to the presidency are increasingly skeptical. Unsubstantiated allegations that the legislation would promote euthanasia grabbed headlines. But beneath such controversies, voters appear most concerned about the scope and costs of the bill - around $1 trillion over 10 years.

Gibbs said Mr. Obama will refocus the debate on the benefits of overhauling the system: more security and lower costs for the majority of people who have health insurance, and new ways to help self-employed people and small businesses get coverage.

"People will leave that speech knowing where he stands," said Gibbs. He said Mr. Obama is considering offering his own health care legislation, instead of letting Congress sort out all the details.

Axelrod appeared on NBC's "Meet the Press," while Gibbs was on ABC's "This Week."