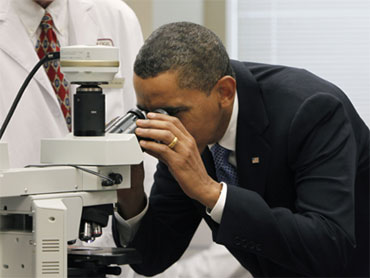 President Barack Obama has announced $5 billion in government grant money to help pay for research into cures for cancer and other diseases.

Obama traveled to suburban Maryland Wednesday to make the announcement at the National Institutes of Health, where he paid tribute to federal employees who "save countless lives."

The president said "we know that that the work you do would not get done if left solely to the private sector." He said he is making a "historic commitment" to new research to save and enrich the lives of people.

Obama said the money from the $787 billion economic stimulus law represents the "single largest boost" to biomedical research. The program included $10 billion for the NIH.

Obama made the announcement in Bethesda, Md., with Health and Human Services Secretary Kathleen Sebelius.

Before making remarks about the grants, Obama and Sebelius toured a NIH oncology laboratory.

"That's a pretty spiffy microscope," Obama remarked as he walked through the lab.

Researchers allowed the president take a look at the brain cells they're studying, explaining the difference between healthy cells and cancerous cells.

Obama said the grants would create "tens of thousands of jobs conducting research, manufacturing and supplying medical equipment, and building and modernizing laboratories and research facilities."

Jared Bernstein, who is Vice President Joe Biden's chief economist, said the $5 billion will support some 12,000 existing projects and create thousands of jobs over the next two years for researchers and educators, as well as medical equipment makers and suppliers.

The investment includes $175 million for The Cancer Genome Atlas (TCGA) to collect more than 20,000 tissue samples from more than 20 cancers, and determine in detail all of the genetic changes in thousands of these tumor samples.

"We are about to see a quantum leap in our understanding of cancer," said NIH Director Dr. Francis S. Collins.

The cancer study involves more than 150 scientists at dozens of institutions around the country, the White House statement said.