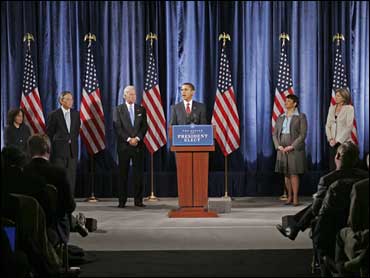 President-elect Barack Obama on Monday named an environmental and energy team that he said signaled his determination to tackle global warming quickly and develop alternative forms of energy. He vowed to "move beyond our oil addiction and create a new hybrid economy."

Chu, 60, is director of the Lawrence Berkeley National Laboratory in Berkeley, Calif., and is a leading advocate of reducing greenhouse gases by developing new energy sources.

The selection of Chu, a Chinese American who shared a Nobel Prize for physics in 1997, received widespread praise on Capitol Hill. Senate Majority Leader Harry Reid of Nevada said he looked forward to "confirming Dr. Chu as quickly as possible."

"His appointment should send a signal to all that my administration will value science. We will make decisions based on the facts, and we understand that facts demand bold action," Obama said at a news conference in Chicago.

Obama made clear he plans take energy policy in a sharply different direction from President George W. Bush, promising aggressive moves to address global warming and pump money and support into research into alternative energy sources such as wind, solar and biofuels.

"America must develop new forms of energy and new ways of using it," he said.

Obama said the dangers of being too heavily dependent on foreign oil "are eclipsed only by the long-term threat of climate change which unless we act will lead to drought and famine abroad, devastating weather patterns and terrible storms on our shores, and disappearance of our coastline at home."

He rejected the notion that economic development and environmental protection cannot go hand in hand.

"We can spark the dynamism of our economy through a long-term investment in renewable energy that will give life to new businesses and industries with good jobs that pay well and can't be outsourced," he said.

Chu's selection was viewed as a clear signal that science would weight heavily in the Obama administration. Chu is a widely respected scientist who has been a vocal advocate for aggressive action to deal with climate change. At the Berkeley lab, he has pushed research into the use of plants and energy from the sun as fuel.

In brief remarks, Chu said: "What the world does in the coming decade will have enormous consequences that will last for centuries. It's imperative that we begin without further delay."

He said Obama had "set the tone and pace for moving our country forward with optimism and calm determination. I hope to emulate his example."

Obama said Browner would "coordinate energy and climate policy" from the White House and "will be indispensable in implementing an ambitious and complex energy policy."

Browner's role has been described as "energy czar" but it's unclear how much power she will have. The selection of Chu, a scientist and not a political figure, suggests that Browner's political roles in crafting energy and environmental legislation would be considerable. Both Jackson, the new EPA chief, and Sutley worked for Browner at the EPA in the 1990s.

Browner, 53, a protege of Gore, served for eight years, longer than anyone else, as EPA administrator during the Clinton administration. No stranger to hard-nose politics, she frequently clashed with conservative Republicans in Congress over environmental regulations.

Separately, officials familiar with the selection of Mr. Obama's Cabinet said the president-elect has selected Chicago schools chief Arne Duncan as education secretary. These officials spoke on condition of anonymity, saying they were not authorized to disclose any personnel decisions not yet announced.

Also Monday, Mr. Obama said an internal investigation backs up his assertions that he and his staff had no involvement in the scandal enveloping the Illinois governor.

Obama called the corruption charges against the governor an "appalling set of circumstances" that he says had nothing to do with his own office. He said he's prepared to release the findings of what he called a ``thorough and comprehensive'' review, but that prosecutors have asked him to wait a week so that he doesn't interfere with an ongoing investigation.

He reiterated at a news conference Monday that he hasn't had any contact with the office of Gov. Rod Blagojevich. The governor is accused of trying to sell or trade Mr. Obama's now-vacant Senate seat.