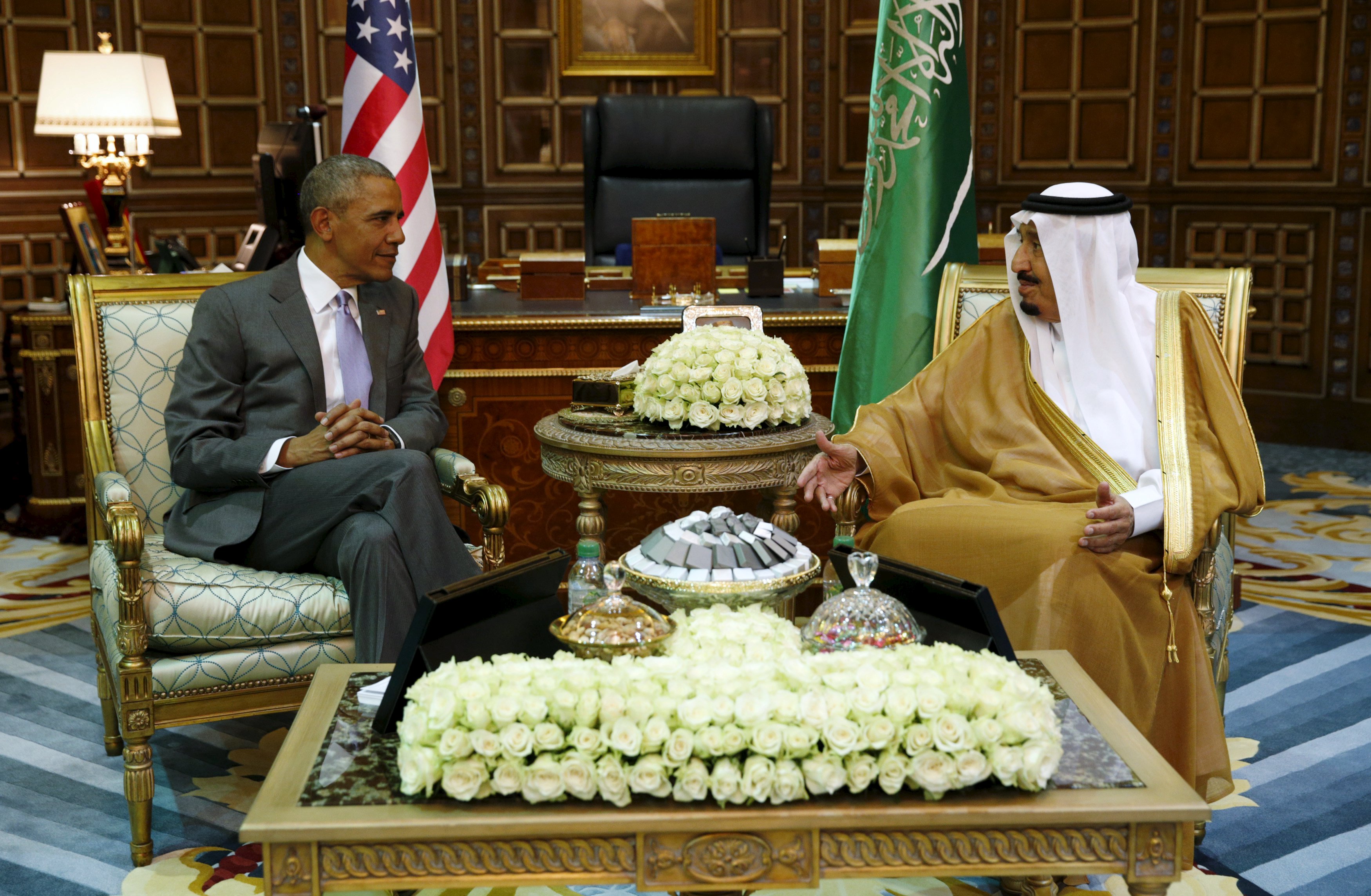 RIYADH, Saudi Arabia -- President Barack Obama landed in Riyadh on Wednesday to meet with Saudi King Salman and other Persian Gulf leaders. The visit -- the U.S. president's fourth visit to Saudi Arabia -- comes against the backdrop of increasingly strained relations with the Saudis, who remain deeply opposed to his outreach to Iran and skeptical of his approach to Syria.

Stepping off of Air Force One at King Khalid International Airport, Mr. Obama was greeted on a red carpet not by the monarch but by Prince Faisal bin Bandar bin Abdulaziz Al Saud, the governor of Riyadh. Saudi state television did not immediately air the president's arrival, but before he landed, State TV showed King Salman greeting other senior officials from Gulf nations arriving for the Gulf Cooperation Council summit.

Mr. Obama's first stop in Saudi Arabia was a one-on-one meeting with King Salman at Riyadh's Erga Palace on Wednesday before the six-nation GCC summit opens Thursday. He was slated to spend little more than 24 hours in the Saudi capital before heading on to visits to London and Hannover, Germany.

The king welcomed Mr. Obama, during a photo opportunity at the palace, saying the Saudi people were very pleased by his visit. In return, the president said he brought the greetings of the American people.

Thanking the president for the American well-wishes, King Salman said "the feeling is mutual between us and the American people."

In addition to Saudi Arabia, the United Arab Emirates, Qatar, Kuwait, Oman and Bahrain are participating in the regional summit, which the White House said would focus on regional stability, counterterrorism including the fight against the Islamic State and al-Qaida, and Iran. Talks are also expected to address the Saudi-led military campaign against Shiite rebels and their allies in neighboring Yemen.

U.S. officials have expressed hope the latest meeting will build on last year's Camp David summit, though they acknowledge differences remain between the U.S. and Saudi Arabia.

The Sunni Muslim-ruled kingdom - the world's biggest oil exporter and the largest buyer of American-made weapons - sees Shiite-led Iran as its main rival. Saudi leaders are concerned that concessions granted to Iran in last year's nuclear deal will embolden it to pursue what the Saudis view as aggressive meddling throughout the region.

Saudi Arabia and Iran back opposing sides in the civil war in Syria and in the conflict in Yemen, where the U.S. military is providing refueling and other logistical help to the Saudi-led war effort.

Mr. Obama's recent comment that the Saudis and Iranians should "share the neighborhood" roiled officials in Riyadh. In remarks to The Atlantic magazine, the president referred to the Saudis as "free riders" and suggested that the nation was too reliant on the American military. A bill working its way through Congress is also straining relations: the legislation could hold Saudi Arabia liable for damages related to the Sept. 11, 2001 terror attacks. The kingdom has threatened to retaliate financially if the bill becomes law.

Still, in a sign of the importance of the Saudi Arabia to the U.S. policy in the region, U.S. officials tried to reassure the Saudis by offering more military support. According to CBS News' State Department correspondent Margaret Brennan, Saudi Arabia is already the largest buyer of U.S.-made weapons.

Ahead of Obama's trip, a group of U.S. senators are called on the president to press Saudi Arabia on human rights issues during the visit and raise the cases of two imprisoned advocates. The White House said concerns about inclusive government and improved rights were on his agenda to discuss with the Saudis and the other Gulf leaders.

Joining the Gulf leaders was Moroccan King Mohammed VI, who was invited to take part in Thursday's summit by the Saudi monarch. Defense ministers from the six Gulf states held talks earlier in the day with U.S. Defense Secretary Ash Carter.

Saudi Deputy Crown Prince Mohammed bin Salman, who is also the kingdom's defense minister, said ahead of Obama's visit that the Gulf and the U.S. must work together to confront challenges including terrorism, instability and what he described as Iranian interference into regional countries' affairs.