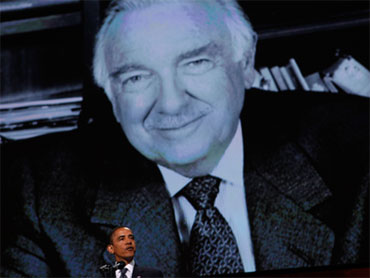 (AP Photo/Charles Dharapak)
Glenn Beck wasn't at New York City's Lincoln Center for Thursday morning's farewell salute to Walter Cronkite. Neither was Matt Drudge, Michelle Malkin or any of the other familiar faces of the vast right wing conspiracy." But they were all present in spirit during President Obama's extended lament on the state of journalism.

Even though he didn't name names, did he really need to?

"In an era where the news that city hall on fire can sweep around the world at the speed of the Internet, would (Cronkite) still have called to double check?" Mr. Obama asked.

Fresh from his August bruising at the hands of the death panel battalion, the president can be excused for looking back more fondly on an earlier era in journalism, one in which Uncle Walter was voted the most trusted man in America. Unlike those proverbial days of yore, the contemporary journalism profession is supposedly chockablock with shoot-from-the-hip artists who too often post first and ask questions later. Unfortunately, the president raised that question, but then chose not to examine why that is so. Instead, he sufficed with making an invidious comparison between that (again, assumed) golden age and the new world order where technology turns everyone into the publisher of their very own Daily Me.

"Would (Cronkite) have been able to cut through the murky noise of the blogs and the tweets and the sound bites to shine the bright light on substance?" the president wanted to know. "Would he still offer the perspective that we value. Would he have been able to remain a singular figure in an age of dwindling attention spans and omnipresent media?:

That was an easy setup for as practiced a rhetorician as Barack Obama.

"The simple values Walter Cronkite set out in pursuit of, to seek the truth, to keep us honest, to explore our world the best he could - they are as vital today as they ever were...and if we choose to live up to Walter's example, if we realize that the kind of journalism he embodied will not simply rekindle itself as part of a natural cycle but will come alive only if we stand up and demand it, and resolve to value it once again, then I'm convinced that the choice between progress and profit is a false one and the golden days of journalism still lie ahead."

I'm curious how this will play. To be sure, the speech paid warm homage to one of the most respected U.S. journalists of the post-World War 2 era. But under the heading of no good deed ever goes unpunished, conservative critics may rightly (no pun intended) bridle at the president's implied suggestion that journalism needs reforming. In other words, did Congress add the title of Lecturer-in-Chief to the president's job description nobody was looking?

Another point. Let's more closely weigh the claim that journalism was richer "back in the day." Yes, we had Woodward and Bernstein, but they were the exception, not the rule. The political elites often got away with a lot of nonsense that never made it into the papers. One also should ask whether all points of view were getting fairly aired. I grew up in the era when three television networks dominated the airwaves and a handful of ponderous establishment dailies told America what was important. To be sure, we're going through a sometimes rocky transition but that doesn't mean the same values represented by Walter Cronkite won't live on.

Here's a heretical thought: Maybe we're living through another golden age of journalism right now but just don't recognize it as yet. To be sure, the panoply of voices is greater than ever before. Admitedly, sorting through the chaff is not always easy. But that's a small price to pay.

What's more, the worry about quality getting sacrificed at the alter of sensationalism - especially in the emerging world of the Internet - applies both to left as well as right. Media baron Rupert Murdoch had something important to say about this in a speech last fall, where he faulted the response of some in the "established media" to the challenge posed by the Internet. His conclusion: "It's not newspapers that might become obsolete. It's some of the editors, reporters, and proprietors who are forgetting a newspaper's most precious asset: the bond with its readers."

That's a worry for President Obama. And if Walter Cronkite were still around to weigh in on the topic, he'd make it unanimous.