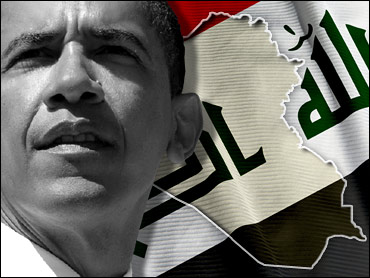 (CBS/iStockphoto)
When it comes to reducing United States troop levels in the Middle East, President Barack Obama is discovering that candidate Barack Obama may have promised more than he could deliver.

As commander-in-chief, Mr. Obama has had to balance supporters' demands for a speedy troop drawdown with the advice of his military advisors about the realities on the ground. Increasingly, though, it looks like the latter will trump the applause lines heard on the campaign trail. But to paraphrase Foreign Policy's Mark Lynch turn of phrase, Mr. Obama faces lots of tough decisions for which there are not very good answers.

Consider Iraq, where the president has taken a half step away from his campaign pledge that getting out would be his first priority in office. During his 2008 presidential run, Mr. Obama promised supporters the immediate withdrawal of one to two brigades of combat troops from Iraq every month, with an eye toward finishing the pullout by the end of this year. The new plan envisions the end of combat operations by September 2010. The U.S. will still keep a 50,000-troop "transition force"

What's troubling to the liberal wing of the Democratic Party is the seeming appearance of an open-ended commitment. Digby offers a representative critique:

"For me, this one is easy. Afghanistan is the most unlikely place to win a war on the planet. To apply the lessons learned in Iraq (such as they were) to this country seems insane to me --- especially the concept of "counter-insurgency," so beloved by the McChrystalites, which is being bizarrely misapplied. But more important than that: whenever you hear people saying that the primary purpose in continuing a war is because "to leave would send the wrong message" and declaring that "perceptions" are the reasons for continuing a slaughter, you know you are in Pentagon NeverNever land."

Even after the U.S. finishes the bulk of its withdrawal from Iraq, it's still possible -maybe even likely? - that a sizeable number of U.S. troops will remain in the region. Earlier this year, Army chief of staff, Gen. George Casey suggested that the U.S. might need to keep combat troops in Iraq and Afghanistan for a decade. Asked by the Army Times about the prospective size of any U.S. force, he answered, said that a "reality scenario" would encompass "10 Army and Marine units."

He'll first have to sell that plan to the commander-in-chief, who knows the risk of blowback from disappointed liberal supporters if they conclude that his campaign promises won't be kept. We're already seeing coming something of the sort in the debate over U.S. policy toward Afghanistan.

During the campaign, Mr. Obama pledged to send over another couple of brigades, or 7,000 troops, to better take the fight to the Taliban and Al Qaeda. The president has since signed off on a plan to ship roughly 21,000 soldiers by the end of the year, which would increase the number U.S. personnel to 68,000.

But the U.S. commander in Afghanistan says he does not believe that's enough to do the job. In a wide-ranging assessment prepared for Defense Secretary Robert Gates, Gen. Stanley McChrystal warns that the U.S. courts mission failure unless more troops get sent Afghanistan. (The existence of the memo was originally published Sunday evening by the Washington Post's Bob Woodward. An interesting side debate: who leaked the memo and why.)
Since European NATO allies are in no mood to dispatch more of their soldiers, any new troop commitments will involve the deployment of more Americans. None of this means it's a slam dunk. During his Sunday blitz of the airwaves, President Obama told NBC's Meet The Press the following:

"What I'm not also gonna do, though, is put the resource question before the strategy question. Until I'm satisfied that we've got the right strategy I'm not gonna be sending some young man or woman over there-beyond what we already..."

For the record, Gates last April was quoted by the Associated Press telling an Army audience at Fort Drum, N.Y. that he did not expect "a significant increase in troop levels in Afghanistan beyond the 68,000, at least probably through the end of the year. Maybe some increase, but not a lot."