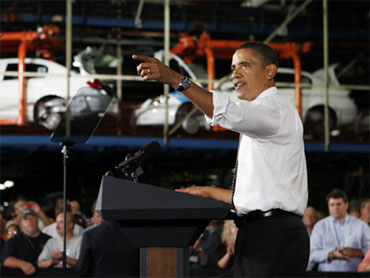 President Barack Obama says U.S. automakers are "getting back into the game."

Rallying workers at a General Motors assembly plant near Youngstown, Ohio, Obama defended his administration's decision to provide a lifeline to the storied automaker. He also praised the just-ended Cash for Clunkers program.

Obama says both steps were good for automakers, consumers and the environment. The evidence: Obama noted the return to work Monday of 150 plant employees. And more than 1,000 workers will return to the assembly lines in coming weeks as the plant ramps up production of the Chevy Cobalt. And next year, the plant will begin producing the Chevy Cruze, a new model that will get more than 40 miles per gallon.

He told autoworkers that the economy is on its way back from the brink because of his policies.

Obama's Word of the Day: "Fight"

Obama said that his administration had no choice but to intervene and prevent the collapse of automakers. He told General Motors employees that their company has retooled itself and is heading back to a solid business, in part, because of its work force.

"Your survival and the success of our economy depended on making sure that we got the U.S. auto industry back on its feet," Obama said, standing near a production line where compact Chevrolet Cobalts are produced.

He said those small cars were among the most popular under his temporary Cash for Clunkers program that offered drivers up to $4,500 to buy more fuel-efficient automobiles. General Motors has increased production of the compact auto and rehired laid-off workers to restore a second shift here.

"Because of the steps we have taken, this plant is about to shift into high gear," Obama said. "A hundred and 50 of your co-workers came back to work yesterday. More than a thousand will be coming back to work in less than three weeks as the production of the Cobalt ramps up."

But in the former steel valley, Obama acknowledged that recovery would not be simple or swift.

"Over the years you've seen factories closed. ... Your daughters and sons have had to move away in search of jobs and opportunities," Obama said, surrounded by workers.

The president planned to spend his Tuesday before friendly groups of autoworkers and union members, trying to assure blue-collar audiences that the economy is coming back - and that his administration deserves credit for saving some of their jobs.

Later, the president addresses the AFL-CIO convention in Pittsburgh, where he will urge the nation's largest labor federation to support his health care overhaul. Obama planned to tell AFL-CIO members how his health care proposals would help repair an economy that is inching toward double-digit unemployment.

The events are designed to be heavy on working-class appeal in hopes of boosting the White House's credentials with the middle-class voters so crucial to the president's economic agenda.

Obama wraps up his daylong trip at a fundraiser for Pennsylvania Sen. Arlen Specter in Philadelphia. He is expected to tell donors that Specter, who earlier this year switched from the GOP to the Democratic Party, is crucial for pushing the White House agenda through.