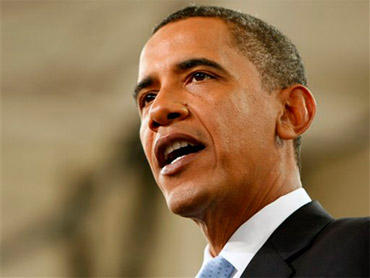 (AP Photo/Gerald Herbert)
President Obama on Tuesday managed to avoid wading into political matters in his speech to the nation's schoolchildren, but in a more intimate discussion with 32 ninth graders that preceded the speech, Mr. Obama discussed everything from health care to Facebook to Ghandi.

The president's planned address, delivered from Wakefield High School in Arlington, Va., sparked criticism from conservatives concerned Mr. Obama may take a political agenda into classrooms. According to the White House pool report, there were a handful of protesters, among other bystanders, lining neighborhood streets near the school, holding signs with messages such as "Mr. President, Stay Away From Our Kids" and "Children Serve God, Not Obama."

Mr. Obama's speech focused on telling kids to work hard in school, but in his 20-minute meeting with Wakefield freshmen, one student reportedly asked the president why the United States lacks universal health care.

"I think we can do it," Mr. Obama answered, adding that he was asking Congress the same question. He said he would focus more on the subject during his Wednesday night address to a joint session of Congress. He also explained that the United States' health care system is employer-based, which leaves some without health coverage. His goal, he said, is to allow people with insurance to keep their plans while giving those without coverage a chance to get it.

In reply to a student who asked for advice on how to become president of the United States, Mr. Obama replied, "Be careful what you post on Facebook." He also told the students to find something they are passionate about.

"There are a lot of politicians like that who, all they're thinking about is just, how do I get re-elected, and so they never actually get anything done," he said.

During the discussion, the president also urged the students to explore community service programs or similar efforts run by churches, synagogues or mosques.

When asked to name someone, either dead or alive, that he would like to have dinner with, Mr. Obama replied Gandhi because of his ability to change the world "through the power of ethics." He added, "It would probably be a really small meal."