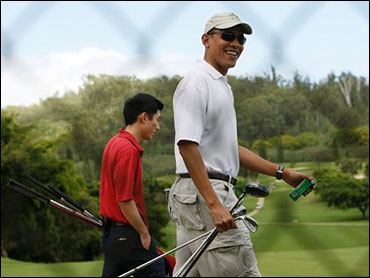 This story was written by Carol E. Lee.


The media glare, the constant security appendage and the sheer production that has become a morning jog or a hankering for an ice cream cone - it's been closing in on Barack Obama for some time.

Now the president-elect appears increasingly conscious of the confines of his new position, bristling at the routine demands of press coverage and beginning to chafe at boundaries that are only going to get smaller.

Obama even took the unusual step Friday morning of leaving behind the pool of reporters assigned to follow him, taking his daughters to a nearby water park without them. It was a breach of longstanding protocol between presidents (or presidents-elect) and the media, that a gaggle of reporters representing television, print and wire services is with his motorcade at all times.

Then when reporters finally caught up with Obama at Koko Marina Paradise Deli and he acknowledged them for one of few times since arriving in Hawaii last Saturday, he sounded resigned.

After ordering a tuna melt on 12-grain bread, Obama approached reporters and placed his hand on the shoulder of pool reporter Philip Rucker of The Washington Post, who was scribbling away in his notebook.

"You don't really need to write all that down," Obama said.

All presidents and would-be presidents struggle with "the bubble" - the security detail and the always-there reporters that impose barriers to any spontaneous interaction with the outside world.

As rapid as Obama's political rise has been, so too has his family's introduction to the bubble.

Four years ago Obama was an Illinois state senator who was on his way to the U.S. Senate. Next month, he will become one of only a handful of modern presidents who has not endured a similar bubble as a governor or top U.S. official before taking office.

Already, Obama no longer gets out for an impromptu lunch or a haircut. The barber he's gone to for 15 years now comes to him, and he mostly orders out. Soon Obama likely will be forced to give up the BlackBerry he often kept attached to his hip during the campaign.

"There's still some things we're not adjusted to," Obama said in a "60 Minutes" interview after the election. "You know, the small routines of life that keep you connected, I think some of those are being lost."

Bill Clinton grew frustrated that he couldn't go out any time he wanted, and once went Christmas shopping without the pool. After he became president, George W. Bush stopped sending e-mails to his daughters because he didn't want the personal notes to become public one day.

"It's just hard to know that there's somebody with you all the time," said Steve Elmendorf, who was deputy campaign manager for John Kerry in 2004. "Being able to get up and go biking or go for a walk, or hold hands with your wife - everything you do is not just under the scrutiny of the press or the pool."
For Obama, who received a Secret Service detail earlier than any presidential candidate since the practice began, the scrutiny is much more intense.

The glare on his family is shaping up to be unprecedented, both because Obama assumes the presidency amid a 24-hour, Web-dominated media age where many traditional boundaries don't exist and because of what he represents. He's the first African-American to be elected president. At 47, he's a young guy - as presidents go. He also has a youthful, attractive family that is social and active.

During the first week in Hawaii, Obama has had to deal with paparazzi waiting in the distance, photographing him shirtless outside his beachfront vacation home and later while spreading his grandmother's ashes at the Pacific coast.

And even though the pool photographers remained out of sight and without an image of these private moments, Obama seems to be tiring of the journalists who have followed him daily since the campaign.

"OK, guys, come on," Obama said last Sunday, looking toward photographers clicking away as he warmed up before a round of golf. "How many shots do you need?"

It's been a progression. And Obama's frustration shows in waves.

On Halloween, Obama grew testy with a Polish media crew as he took his daughter Sasha to a party at his campaign treasurer Marty Nesbitt's Chicago home.

"All right guys. That's enough. You've got a shot. Leave us alone. Come on guys. Get back on the bus," Obama said before breaking into a trot with Sasha still holding his hand.

The day before Thanksgiving, a sixth grader at a Chicago school asked Obama about his new life.

"You don't have a lot of privacy," Obama told some 200 children, adding that going to Walgreen's and riding a bicycle are now far more involved than before.

Those close to the Obamas have spoken to the media less and less since the election. Calls and e-mails to close friends and associates of the Obamas were not returned.

"My husband and I have been asked not to speak with the press about the Obamas," one of them wrote in an e-mail. "They would prefer that we stay out of the papers for now."

It seems the narrower the gap between transition and reality gets, the more private Obama has tried to become.

"You can see how he chafes at it," Elmendorf said. "It's hard for people who like to do outdoors things. It's also hard for people with young kids. … You decide at 9 in the morning, I'm not going out anymore, then at 2 p.m. you decide, 'Hey let's get some ice cream.'"

"Normal people can do that. The president or president-elect can't do that," he said.

Friday was only the second time since the election that Obama has traveled without the press pool. Reporters also were left behind in Chicago once when they couldn't gather fast enough after Obama decided to return home from his transition office.

Obama spokesman Ben LaBolt issued a statement Friday saying that because the president-elect had no further events scheduled as of 9:30 a.m., aides sent reporters back to their Waikiki Beach hotel 30 minutes away from his vacation home. But then Obama changed his mind.

"The president-elect decided to take the girls to a water park and we assembled the pool as quickly as possible," the statement said.

Later, when paying attention to his press pool and ordering treats for his daughters and their friends at Kokonuts Shave Ice & Snacks, Obama went so far as to offer reporters some shave ice.

"I don't think this is against policy," he continued. "You want one, I can tell."

Reporters declined the president-elect's offer. But, perhaps in a sign of defiance, Obama made it while standing in one of his hometown spots with his BlackBerry clipped to his hip.