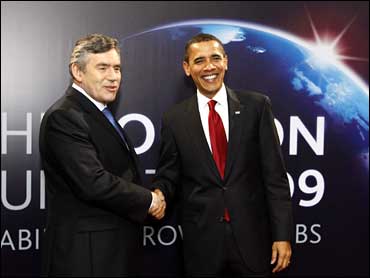 British Prime Minister Gordon Brown on Thursday discussed the release of the Lockerbie bomber with President Barack Obama in their first talks since U.S. officials criticized Scotland's decision to free the man.

Brown and Obama spoke on the phone for 40 minutes on Thursday and exchanged views on the contentious decision by Scotland's justice officials to free Abdel Baset al-Megrahi on compassionate grounds.

The White House said Obama "expressed his disappointment over the Scottish Executive's decision to release convicted Pan AM 103 bomber al-Megrahi back to Libya."

A spokesman for Brown's office, speaking on condition of anonymity in line with policy said the prime minister made it clear it was a matter for the Scottish government.

The spokesman declined to say whether Obama or Brown had raised the matter, but said the call between the two men was "warm and substantive."

"The two leaders concluded that the special relationship was as strong as ever and that there continued to be good cooperation across the full global agenda," the spokesman said.

Al-Megrahi was released from a Scottish prison on Aug. 20 after doctors said he had terminal cancer. The decision was made by Scotland's government, not Brown - who has declined to say whether he thought the release was justified.

Families of some American victims have reacted with anger, and the release was sharply criticized by Obama and FBI director Robert Mueller. Al-Megrahi is the only person ever convicted in connection of the 1998 bombing of Pan Am Flight 103 over Scotland, which killed all 259 people on board - mostly Americans - and 11 people on the ground.

The leaders also discussed Afghanistan, where U.S. and British troops have suffered heavy losses in a push to improve security ahead of the country's election Aug. 20. The poll has been marred by reports of ballot-box stuffing and suspicious tallies.

It was the first conversation between the two leaders since July.