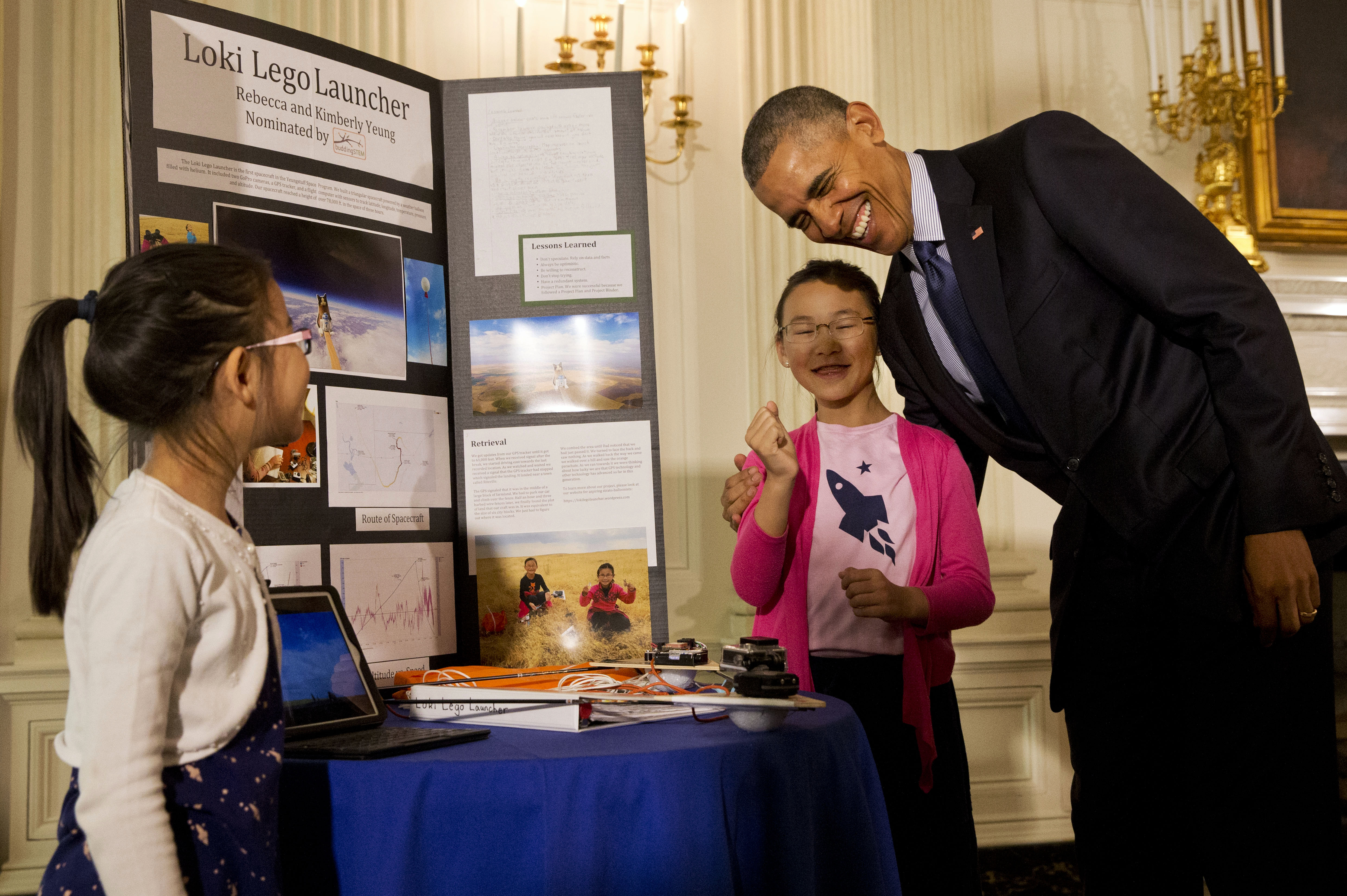 President Obama had nothing but praise -- and awe -- for the young participants presenting at the White House Science Fair Thursday, expressing hope that one day the next generation of scientists would go on to "tackle some of the biggest challenges" the U.S. faces.

"All of you are showing the rest of us that it's never too early in life to make a difference," the president told White House Science Fair contributors Wednesday. "Whether you're fighting cancer, combating climate change, feeding the world, writing code that leads to social change, you are sharing in this essential spirit of discovery that America is built on."

The gathering of bright minds is the sixth and final science fair of President Obama's administration. It's also the largest White House Science Fair so far, with over 130 students participating from more than 30 states. Student alumni from previous science fairs were also in attendance.

"The progress we're seeing across the board is extraordinary. And it's just the beginning," Mr. Obama said. "The rest is going to be up to you, the next generation. Somewhere in your generation are pioneers that are going to be the first to set their foot on Mars."

He joked "the first humans anyway," commenting that he didn't know about "other life forms."

"We are counting on all of you to help build a brighter future," the president continued. He pledged that his administration would support the future scientists "every step of the way," adding that he would personally follow their progress "so that when you invent some cancer cure... I will take some of the credit."

While Mr. Obama gave nothing but compliments for the young scientists gathered, he did air one grievance about the annual event.

"The only problem with the science fair," he ribbed later, "is that it makes me feel a little inadequate."

In his address, the president also announced further boosts to education across the country with initiatives bolstered by private sponsorships. He touted a new Department of Education guidance to states and school districts to promote science, technology, engineering, and math (STEM) and computer science learning.

He also unveiled a recent $200 million investment by Oracle to support computer science education for over 125,000 students across the country. With the help of Code.org, the president said, more than 500 elementary and high schools have additionally committed to expanding computer science access.

Earlier Wednesday, the president took a walking tour of the science projects set up at the White House, including an experiment on electricity generation, a study on renal fibrosis, and the creation of a vacuum cleaner for subways.

Of one exhibit that focused on dissolving styrofoam, the president called it "outstanding."

And when the young scientists pointed out that the styrofoam residue could be used as a glue, Mr. Obama responded: "It's been a while since I had to glue something."

One 18-year-old from Kentucky, Sanjana Rane, discovered how a specific protein could help in detecting and treating renal fibrosis, which leads to kidney failure.

The president, after listening to Rane's presentation, feigned concern for the high school senior's future: "My only concern here is that, you know, you may have trouble getting into college," Mr. Obama said. "I'm sure your SATs were shabby."

After going in for a hug with the teenager, the president promised: "If you need a recommendation from me, I'll help you out."