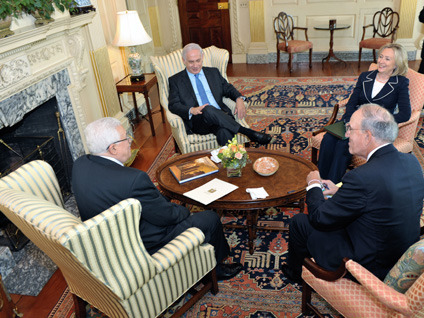 The week in Washington saw President Obama and Secretary of State Hillary Clinton step forward and publicly take the lead for their effort to achieve a peace agreement between Israelis and Palestinians.

In carefully orchestrated and choreographed movements, the two Americans hosted key leaders from the Middle East in yet another high profile effort to conclude the peace agreement which has so far eluded all who have tried it before.

Inviting Egyptian President Hosni Mubarak and Jordan's King Abdullah to the White House on Wednesday was a positive sign of inclusion and a smart political move. It was also a change in American strategy from the years when Bill Clinton was in the White House and Arab leaders were consulted but rarely seen out front as being supportive of peace efforts.

This time around, the Palestinian Authority negotiators, led by President Mahmoud Abbas, have some open and public backing from key regional leaders, something the late Yasir Arafat claimed he needed and didn't have at Camp David in 2000.

Each of the Arab leaders had a separate, one on one meeting with the president at the White House as did Israeli Prime Minister Benjamin Netanyahu before they all gathered for a working dinner hosted by Mr. Obama. The former British Prime Minister, Tony Blair, included as the Quartet's (U.S., U.N., E.U. and Russia) representative, joined the small gathering and thus included further international support.

After the tone was set by the White House, the actual talks moved Thursday morning to Clinton's State Department. Direct, face-to-face talks between Israeli and Palestinian leaders are not at all unprecedented although they have not occurred for 20 months, almost two years. But Clinton, after getting things started before the cameras, quickly went private, moving the talks to her outer office and getting down to business with Netanyahu, Abbas and the administration's chief negotiator, George Mitchell, joining her.

Israel-Palestine Peace Negotiations to Continue
Obama: "Do We Have the Wisdom" for Peace?

The meeting of the foursome was expanded to include several aides from each side before Abbas and Netanyahu were left alone. The two talked for about an hour and a half without note takers or interpreters, according to state department officials.

Mitchell, who briefed reporters, said he was not going to divulge much information because the two leaders "...agreed that for these negotiations to succeed, they must be kept private and treated with the utmost sensitivity." No one was surprised.

What Mitchell did reveal was the aim of the parties to take as their first step the reaching of a so-called framework agreement on the core issues -- security, borders, Jerusalem and refugees. "The purpose of a framework agreement will be to establish the fundamental compromises necessary to enable them to flesh out and complete a comprehensive treaty that will end the conflict and establish a lasting peace between Israel and the Palestinians," he said.

That's diplo-speak for 'let's try to get to second base before we get to home plate.'

Reporters wanted to know what was going to happen when a self-imposed freeze on settlement expansion ends in about three weeks. Sorry, Mitchell said, not going to get into substance. It was announced that the next round of talks would be September 14th and 15th in the region and further rounds were expected to take place roughly every two weeks with the deadline of reaching agreement in a year's time.

Two new themes were mentioned by Mitchell. Noting at least several previous efforts at peacemaking by American presidents failed in part because "time ran out," Mitchell said "Well, this president, I believe, will succeed. But as he said yesterday, neither success nor failure is predetermined or guaranteed, but it isn't going to be because time ran out at the end."

That's a good reason to get going but as one looks at reaching agreement on the core issues in a year's time, one needs to remember it has taken Mitchell a year and half just to convince Netanyahu and Abbas to meet face to face.

As a final point, Mitchell gave some insight into how the Obama administration analyzes the tough decisions ahead for both sides. "They must weigh the difficulties they face in getting agreement and they must weigh the difficulties they will face if they don't get an agreement. And we believe it is a very powerful argument that if you subject these to careful, reasoned and rational analysis, to conclude that the latter difficulties, if they don't get an agreement, will be much greater and have a much more profound impact on their societies than those they face in trying to get an agreement."

Now, since when has Middle East peacemaking ever come down to "careful, reasoned and rational analysis?" If it does, then Mr. Obama really will have found the key to success which has eluded all who have gone before.

Charles Wolfson is CBS News' State Department Reporter. You can read more of his posts in Hotsheeet here.