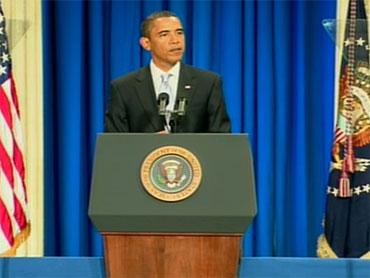 President Barack Obama sternly warned Wall Street Monday against returning to the sort of reckless and unchecked behavior that threatened the U.S. with a second Great Depression like that of the 1930s.

Even as he noted the U.S. economy and financial system were pulling out of a downward spiral, Obama warned financial titans on the first anniversary of the Lehman Brothers collapse that they could not count on any more bailouts.

He credited his administration and the $787 billion stimulus package rammed through Congress in the first days of his taking office for pulling the country back from the brink.

"We can be confident that the storms of the past two years are beginning to break," he said.

And even as the economy begins a "return to normalcy," Obama said, "normalcy cannot lead to complacency."

Nevertheless, Obama said, "Instead of learning the lessons of Lehman and the crisis from which we are still recovering, they are choosing to ignore them."

His tough message warned the financial community to "hear my words: We will not go back to the days of reckless behavior and unchecked excess at the heart of this crisis, where too many were motivated only by the appetite for quick kills and bloated bonuses."

"Many of the firms that are now returning to prosperity owe a debt to the American people," the president said. "They were not the cause of this crisis, and yet American taxpayers, through their government, had to take extraordinary action to stabilize the financial industry...It is neither right nor responsible after you've recovered with the help of your government to shirk your obligation to the goal of wider recovery, a more stable system, and a more broadly shared prosperity."

Goldman Sachs in fact spent $6.6 billion in the second quarter on pay and benefits - that's 34 percent more than two years ago.

Obama spoke at Federal Hall in the heart of Wall Street before an audience that included members of the financial community, lawmakers, and top administration officials. Afterwards, he joined former President Bill Clinton for lunch at a New York restaurant as the White House announced Obama would address the annual meeting of the Clinton Global Initiative Sept. 22 while in New York for the United Nations General Assembly meeting.

In marking his determination to prevent a repeat of the crisis that nearly brought down the global financial system last fall, Obama said he was attacking the problem on several broad fronts, including asking Congress to approve new rules to protect consumers and a new Consumer Financial Protection Agency to enforce those rules. He also called for the closure of regulator loopholes and overlap that "were at the heart of the crisis" because they left key officials without "the authority to take action."

At the Pittsburgh G-20 economic meeting later this month, the U.S. will focus on ways "to spur global demand but also to address the underlying problems that caused such a deep and lasting global recession," Obama said.

Obama and others seeking ways to better monitor the financial system and to police the products banks sell to consumers have been opposed by lobbyists, lawmakers and turf-protecting regulators. Mergers and sales of banks have consolidated lending power in even fewer hands. And those large firms still bet far more than the capital they have on hand.

Yet regulations have not moved. Much of the legislative motivation in Washington has been consumed by the contentious debate over changes to the health care system. Government intervention into private automakers such as General Motors have left lawmakers skittish to move further into corporate board rooms. And it's not as if another collapse is obviously imminent.

Unplugged: Obama Has Not Emphasized Financial Reform
In Congress, Republican Sen. Judd Gregg said the administration deserves "considerable credit" for acting to stabilize the financial system, but he warned that Congress should not overreact in approving new regulations.

"We must be wary of the reality that, in an attempt to address yesterday's failures, Congress will put in place regulatory schemes which will fundamentally undermine risk taking, capital formation and entrepreneurship," Gregg said.

As of June 30, three banks - JPMorgan Chase, Wells Fargo and Bank of America - held $2.3 trillion in domestic deposits, or $3 out of every $10 in deposit in the United States. Three years ago those three institutions held about 20 percent of the industry total.

Obama has sought tougher capital requirements for banks, arguing that banks' buying of exotic financial products without keeping enough cash on reserve was a key cause of the crisis. Treasury Secretary Timothy Geithner has urged the Group of 20 nations to agree on new capital levels by the end of 2010 and put them in place two years later.

The administration also has proposed increased transparency of markets in which banks trade the most complex - and potentially risky - financial products. Obama's broad plan also would give the Fed new oversight powers and impose conditions designed to discourage companies from getting too big.

Sen. Chris Dodd, the Democratic chairman of the Senate Banking Committee, is leading the push for those new rules and his aides hope to have legislation together before the year's end. Already they have conducted hearings on the source of the problem and how best to prevent another.

But a key component of the Obama plan - creating an agency to oversee marketing financial products to consumers - faces a tough road to become a law. Industry lobbying against it and other proposed financial rules has been fierce and the president's fellow Democrats have been slow to take up the cause.