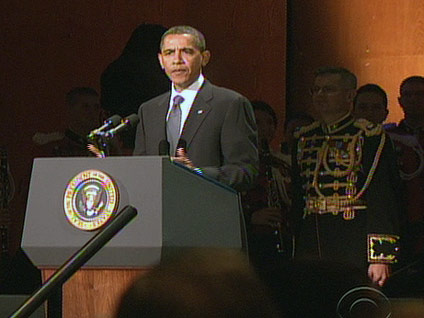 (CBS)
President Obama honored legendary CBS Newsman Walter Cronkite at a memorial service today, saying that Cronkite earned title of the most trusted man in America through hard work and a commitment to fundamental values.

"He didn't believe in dumbing down," Mr. Obama said. "He trusted us."

The president said he did not know Cronkite personally, though, like millions of Americans, he was nonetheless touched by him.

"I have benefitted as a citizen from his dogged pursuit of the truth, his passionate defense of objective reporting, and his view that journalism is more than a profession – it is a public good vital to our democracy," he said.

The president spent the second half of his remarks focused on the state of the news media, which he suggested too often falls short of the standards Cronkite set. He said that even today Cronkite would have been able to have an impact despite a "cheapened" public discourse, something he attributed in part to the fact that information can be sent around the world with a click before it has been checked out.

Cronkite, Mr. Obama said, always verified the facts before reporting – something that cost him his job early in his career. Though Cronkite wanted to get the news first, the president said, he would not sacrifice getting it right.

"Walter wasn't afraid to rattle the high and mighty, but never dared compromise his integrity," he said.

Mr. Obama attributed Cronkite's "endless inquisitiveness" to growing up with a mother who sold encyclopedias for a living, and suggested the newsman "never lost the integrity or plain-spoken speaking style" he developed growing up in the heartland.

"He was always looking for the story, not the storyline," Clinton said. "And there's a big difference."

View photos of Cronkite with newsmakers