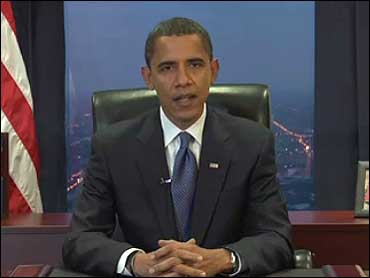 President-elect Barack Obama said Saturday that he's asked his economic team for a recovery plan that saves or creates more than 2 million jobs, makes public buildings more energy-efficient and invests in the country's roads and schools.

"We won't just throw money at the problem," Obama said in the Democratic Party's weekly radio address. "We'll measure progress by the reforms we make and the results we achieve - by the jobs we create, by the energy we save, by whether America is more competitive in the world."

Obama's remarks come after the Labor Department announced Friday that employers cut 533,000 jobs in November, the most in 34 years.

Obama said his plan would put millions of people to work by "making the single largest new investment in our national infrastructure since the creation of the federal highway system in the 1950s."

School buildings would get an upgrade, too. "Because to help our children compete in a 21st century economy, we need to send them to 21st century schools," Obama said.

As a part of the plan, Obama said he wants to expand Internet access in communities. Hospitals also should be connected to each other online.

"Here, in the country that invented the Internet, every child should have the chance to get online," he said.

Obama said he would announce other details of the economic recovery plan in the coming weeks. He said he'd work with Congress to pass the initiative when lawmakers reconvene in January.