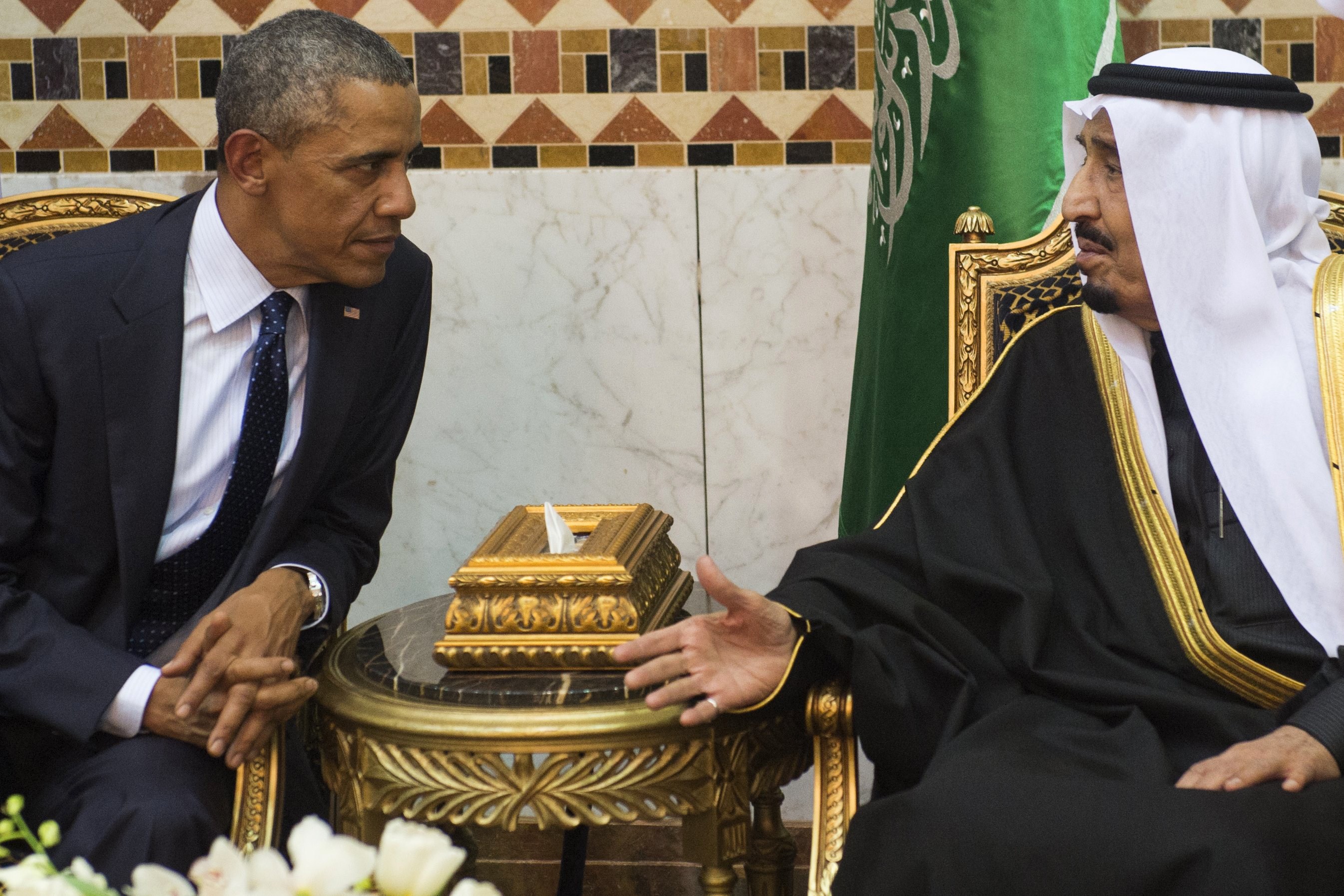 DUBAI, United Arab Emirates- When President Barack Obama arrives in the Saudi capital on Wednesday, he'll face an increasingly assertive leadership still heavily dependent on U.S. weapons and military might that nonetheless has little trust in him and essentially believes it's been thrown a curveball.

The president is expected to push Saudi Arabia, the world's top oil exporter and biggest buyer of American-made arms, and other Gulf allies for greater cooperation and military backing in the fight against the Islamic State of Iraq and Syria (ISIS.)

But Washington is also concerned about mounting civilian casualties and the expansion of al Qaeda's active branch in Yemen amid the chaos spread by the Saudi-led war there, as well as Saudi Arabia and Iran's aggressive foreign policy stances that are exacerbating sectarian bloodshed across the Middle East.

Another messy, unspoken hurdle to trudge past is Obama's recent comments to The Atlantic magazine, in which he said Saudi Arabia and its nemesis Iran need to "share the neighborhood" rather than expect the United States to use its military power to settle scores on behalf of its Gulf allies. In the interview, Obama also described Gulf countries, among others, as "free riders" that show "an unwillingness to put any skin in the game" when it comes to their own regional security.

When asked to respond, Saudi Foreign Minister Adel al-Jubeir told reporters in Riyadh he wouldn't comment on statements attributed to the president in magazines, but asserted that the kingdom evaluates its relationship with the U.S. based on Washington's commitment to promises made.

In a rare open letter to Obama, a prominent Saudi prince explained his view of the Obama administration's commitment to the kingdom. Prince Turki Al-Faisal, who once headed the kingdom's intelligence agency, wrote in response to The Atlantic interview that the president had given King Salman assurances in Washington last September on the need to counter Iran's "destabilizing activities," but "now, you throw us a curveball."

He rejected Obama's characterization of Saudis as "free riders" before asking Obama if he had "pivoted to Iran so much" that he'd equated Saudi Arabia's long-standing friendship with the U.S. to Iran's leadership.

Even before the interview, Saudi leaders were frustrated with the Obama administration for securing a nuclear agreement with Iran that lifted U.N. sanctions against the Shiite-led country and opened it up to business with the West.

Fahad Nazer, a senior political analyst at JTG Inc. and a former political analyst at the Saudi Embassy in Washington, said Prince Turki's letter, published in Saudi newspapers, was "the tip of the iceberg." There have been at least a dozen major opinion pieces in mainstream Saudi papers also expressing disappointment and dismay at what the president said.

"Most of the opinion pieces obviously do not view Obama's foreign policy in the region favorably," Nazer said. "One of the themes many of them emphasized is that he's abandoned the United States' traditional leadership role in the region and left it to others."

While Saudi Arabia, the United Arab Emirates and other Gulf states are part of the U.S.-led coalition carrying out airstrikes against ISIS in Iraq and Syria, Riyadh is unlikely to immediately offer greater support for the U.S.-led campaign without guarantees that this effort goes hand-in hand with the removal of Syrian President Bashar Assad, who is heavily backed by Russia and Iran.

The U.S. president is facing pressure at home to come up with a more assertive, coherent strategy to defeating the ISIS group, or the effort risks becoming a "grinding failure for our nation," wrote chairman of the Armed Services Committee Senator John McCain in a letter last week to Defense Secretary Ash Carter.

On Wednesday, Obama is scheduled to hold bilateral talks with Saudi King Salman and on Thursday attend a summit of Gulf leaders that includes Saudi Arabia, the UAE, Qatar, Kuwait, Oman and Bahrain. It will be Obama's fourth visit to the kingdom since taking office.

While both the U.S. and Saudi Arabia see the ISIS group as a security threat, the Saudis view Syria as the centerpiece of the region's upheaval and will stress to the Obama administration that so long as Assad remains in power, the ISIS threat will be there, said Nazer, the JTG analyst.

Another major difference, according to analysts, is that while Saudi Arabia sees Iran's backing of Shiite militias in Lebanon, Yemen, Iraq and Syria as the root cause of regional stability, the Saudis sense that the Obama administration still hopes Iran can play a constructive role in the Middle East, especially in pushing back the ISIS group.

Despite these differences, the U.S.-Saudi relationship remains very profitable. The Gulf states are major buyers of American-made military aircraft and other equipment, and they routinely carry out joint military exercises with U.S. troops. Bruce Riedel, a senior fellow at the Brookings Institute, notes the Obama administration has sold a whopping $95 billion in arms to Saudi Arabia.

Stephen McInerney, executive director of the Washington-based Project on Middle East Democracy, said because the U.S. defense industry "is to a quite significant degree subsidized by the Saudi relationship," it makes it difficult for American officials to confront the Saudis on other issues of concern, including human rights and their espousal of an ultraconservative form of Sunni Islam known as Wahhabism.

The kingdom also remains the United States' second-biggest foreign oil supplier, delivering an average of about 1 million barrels a day.

Despite strong military and business ties, Mustafa Alani, the director of the security and defense department at the Gulf Research Center in Geneva, said Obama will be met by a Saudi leadership that has little faith in him and is already thinking about the next American president.

"They've had enough of empty promises. ... He cannot repair it at the eleventh hour," Alani said.