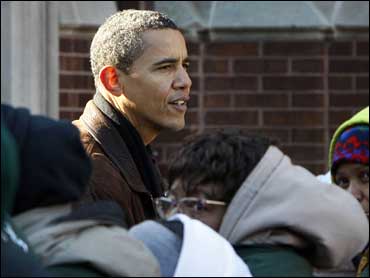 President-elect Barack Obama said the U.S. economy seems destined to get worse before it gets better and he pledged a recovery plan "that is equal to the task ahead."

Obama also said in an interview broadcast Sunday that the survival of the domestic car-making capacity is important, yet any bailout must be "conditioned on an auto industry emerging at the end of the process that actually works."

Less than six weeks before he takes office, Obama said that help for homeowners facing foreclosure is an option as part of his plan. He sidestepped a question about when he plans to raise taxes on wealthy Americans.

Obama's interview on NBC television's "Meet the Press" was his most extensive since winning the White House more than a month ago.

In the intervening weeks, the economy has showed clear signs of worsening. Employers said they eliminated more than 500,000 jobs in November alone and retailers reported disappointing holiday-season sales.

"The economy is going to get worse before it gets better," he said twice in the early moments of the interview, taped Saturday in Chicago.

The president-elect announced on Saturday he would call for the most massive spending on public works since the creation of the interstate highway system a half-century ago. In a word of caution to powerful lawmakers, he said the first priority would be "shovel-ready" projects - those that could create jobs rights away.

"The days of just pork coming out of Congress as a strategy, those days are over," he added.

Obama said repeatedly that his economic advisers are at work on an economic aid package, but he has largely stayed out of the public debate over bailout aid to the Detroit automakers. Congress and the Bush administration are at work on a plan for roughly $15 billion for General Motors Corp., Ford Motor Co. and Chrysler LLC. Congressional leader hope to pass the measure this week.

Obama suggested he would support such a plan, so long as it was accompanied by conditions to "keep the automakers' feet to the fire in making the changes that are necessary" for longer-term survival. He also indicated he did not believe bankruptcy is an acceptable course of action for any of the companies.

The president-elect sidestepped a question about the pace of a troop withdrawal from Iraq, saying he would direct U.S. generals to come up with a plan "for a responsible drawdown." He said in the campaign he wanted most U.S. troops withdrawn within 16 months, but did not say then, nor has he now, how large a deployment should be left behind.

Obama also spoke about his latest Cabinet selection, retired Gen. Eric Shinseki to head the Veterans Affairs Department. Shinseki was forced into retirement by the Bush administration after he said the original invasion plan for Iraq did not include enough troops.

"He was right," Obama said.

The president-elect declined to comment on the possible appointment of Caroline Kennedy to New York Sen. Hillary Rodham Clinton's seat in the Senate. Obama tapped Clinton recently as his secretary of state.
By AP Special Correspondent David Espo