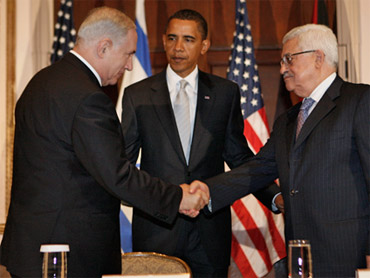 (AP Photo/Charles Dharapak)
Just eight months into his presidency, Barack Obama makes no effort to conceal his impatience and frustration over the Israeli-Palestinian peace process.

His predecessors, each of whom spent 4 or 8 years in pursuit of a Mideast peace agreement, would tell him: welcome to the club.

"Simply put, it is past time to talk about starting negotiations -- it is time to move forward," said Mr. Obama sternly at the start of three-way talks today with Israeli Prime Minster Benjamin Netanyahu and Palestinian President Mahmoud Abbas.

Above all else, Mr. Obama wants Israel and the Palestinians to re-launch direct negotiations. Today was the first time the two leaders sat face-to-face in nearly a year.

Mr. Obama spent about 40 minutes in separate sessions with Netanyahu and Abbas -- and a similar amount of time in their tri-lateral meeting.

He lectured each of the two Mideast leaders on what they need to do to move the process forward. He said:

• Israel has spoken of restraining its settlement activity, but needs to "translate these discussions into real action."

•Palestinians "need to do more to stop incitement and to move forward with negotiations."

Mr. Obama feels some progress has been made in the Mideast peace process since he took office, "but we still have much further to go."

He said it's time for Netanyahu and Abbas "to show the flexibility and common sense and sense of compromise that's necessary to achieve our goals."

Mitchell, who sat in on today's meetings, said Mr. Obama concedes "it's difficult to disentangle ourselves from history, but we must do so."

But as if laying down the law to Netanyahu and Abbas, Mr. Obama is quoted by Mitchell as telling them: "we all must take risks for peace."

These and other Mideast leaders have heard similar words from other U.S. presidents.
Over the years, they've come tantalizingly close to a comprehensive peace agreement, but in the end, fell short of the objective.

But Mitchell, who helped negotiate the Good Friday Agreement that led to an end of sectarian violence in Northern Ireland, told reporters he "believes deeply" that conflicts begun by human beings, can be ended by human beings.

It took nearly fifty years to end the Northern Ireland conflict known as "The Troubles." The Israeli-Palestinian clash has already surpassed that.

More Coverage of Obama at the U.N.