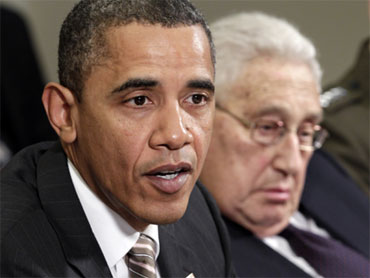 President Barack Obama said it's time for the U.S. Senate to ratify a new nuclear arms treaty with Russia - and there's no good reason for Republicans to delay it.

Secretary of Defense Robert Gates also said that if Senate Republicans continue to stall a ratification vote, the national security interests of the United States will be compromised.

The president said that U.S. allies in Europe want the pact approved - for their protection, not just America's.

Mr. Obama, who is attending the NATO summit in Portugal, said there is no verification system in place now regarding Russian nuclear arsenals, but that would change if the treaty were ratified.

Taking aim at Republican senators standing in the way of the nuclear arms reduction pact, the president said they were abandoning Ronald Reagan's lesson of nuclear diplomacy: "Trust but verify."

Republicans led by Sen. Jon Kyl of Arizona say they won't consider the treaty until the administration budgets adequate money for the nation's nuclear arsenal and the laboratories that oversee them. The treaty would reduce the limits on U.S. and Russian warheads, and Kyl says he needs assurances that the remaining nuclear arsenal is modernized and effective.

The administration has pledged $85 billion to maintain the nuclear arsenal over the next 10 years, in an attempt to address Kyl's concerns. Democrats might be less willing to go along with that plan if Republicans stall the treaty.

U.S. Defense Secretary Robert Gates said Saturday that if the Senate doesn't pass START, momentum for modernizing and overhauling the U.S. nuclear weapons program would be lost, and Russian cooperation on U.S. priorities — from the Afghan war to the diplomatic squeeze on Iran — would be at risk.

"There would be significant consequences" beyond the specifics of the U.S. and Russian nuclear stockpiles, Gates said while in Chile for defense meetings.

Gates also pointed out today that if the treaty is not ratified, the U.S. would lose firsthand knowledge it now gets from onsite inspections in Russia. The wider political fallout is hard to predict, Gates said, but could mean less Russian cooperation with overland supply routes for the war in Afghanistan.

He noted that Russia recently approved his request to allow special mine-resistant troop carriers to cross Russia on their way to the Afghanistan front lines.

"The reality is, despite what anybody says, I as Secretary of Defense and the entire uniformed leadership of the American military, believe this treaty is in our national security interests."

Gates also said Russia had voted with the U.S. and other allies to impose the latest round of U.N. penalties against Iran over its nuclear program. Russia is a partner with Iran in a civilian nuclear power project and generally has been less concerned than the U.S. that Iran may be hiding a bomb program.

The Pentagon chief gave a forceful defense of the treaty against Republican complaints that it limits U.S. options for future missile defense plans.

"Anything that we have in mind now or in the years to come that ... we have even thought about is not prohibited," Gates said with frustration.

President Obama also used his weekly radio and Internet address to focus on international affairs at a time of increased political gridlock at home as the GOP prepares to take control of the House in the new Congress next year.

Describing his nuclear efforts as part of a five-administration continuum, President Obama said the treaty to cut the permitted number of U.S. and Russian long-range nuclear warheads by a third was "fundamental to America's national security."

The president went to great length listing the prominent Republicans from previous administrations who back the deal, including former secretaries of state Colin Powell, George Shultz, Jim Baker and Henry Kissinger. He cited GOP Sen. Dick Lugar's support, but suggested that other Republican senators were playing politics with national security.

"Some make no argument against the treaty - they just ask for more time," President Obama said. "If the Senate doesn't act this year - after six months, 18 hearings, and nearly a thousand questions answered - it would have to start over from scratch in January."

And it would face tougher odds as the Democratic majority loses six seats.

Without ratification, Russia may be less cooperative in enforcing strong sanctions on Iran, securing loose nuclear material from terrorists or helping the U.S. equip troops in Afghanistan, Obama said. He said no agreement with Russia meant no U.S. inspectors watching over one of the world's biggest nuclear arsenals.

"Those who would block this treaty are breaking President Reagan's rule - they want to trust, but not verify," President Obama said.

McConnell, in the GOP radio and Internet address, focused on the stubbornly high unemployment rate and Democrats' failure to alleviate joblessness. The Kentucky senator said Democrats had exploded the national debt with the stimulus and other spending programs, and were now asking Americans for more money. He said it was imperative that the Bush-era tax cuts that expire this year be extended.

"Americans don't think we should be raising taxes on anybody, especially in the middle of a recession," McConnell said. "But instead of giving Americans what they want, Democratic leaders plan to use the last few days that lawmakers expect to spend in Washington this year focusing on everything except preventing this tax hike, which will cost us even more jobs: immigration; a repeal of the 'don't ask, don't tell'; a reorganization of the FDA; more environmental regulations."

President Obama appears ready to compromise with Republicans on temporarily extending the tax cuts passed under President George W. Bush, despite previous opposition to continuing them for couples making over $250,000. Republicans have sought permanent cuts for all, and McConnell said that the blame for inaction would fall on the Democrats when the hikes "hit every taxpayer and hundreds of thousands of small businesses at the stroke of midnight on December 31st."

Still, he suggested that Republicans could compromise on the tax issue.
President Barack Obama took aim Saturday at Republican senators standing in the way of a nuclear arms reduction pact with Russia, saying they were abandoning Ronald Reagan's lesson of nuclear diplomacy: "Trust but verify."