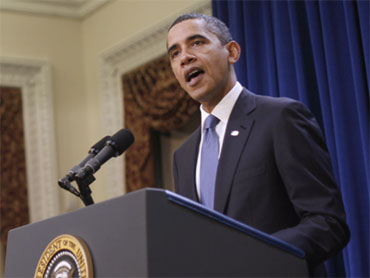 The president ignored the rebuff, and he is framing today's meeting with incoming GOP leadership as the first step toward a new and productive relationship, reports CBS News senior White House correspondent Bill Plante.

Other issues include extending unemployment insurance; repealing "Don't Ask, Don't Tell"; and the report of a commission on ways to reduce the federal deficit.

On Monday Mr. Obama made a point of raising expectations for Republicans, who up to now have united against him.

He said he hopes the meeting "will mark a first step toward a new and productive working relationship, because we now have a shared responsibility to deliver for the American people on the issues that define not only these times but our future, and I hope we can do that in a cooperative and serious way."

But the newly-empowered Republicans, meeting with the president for the first time since the election, seem in no mood to compromise, as evident in an op-ed in today's Washington Post by Boehner and McConnell.

Its language is sure to aggravate the president and Democrats:

"Our friends across the aisle have clung for too long to the liberal wish list, including a job-killing health-care law ...

" . . . Now we have a real chance to move away from the misplaced priorities of the past two years ..."

"... Democrats in Congress are working feverishly to move legislation on everything except stopping the tax hikes and lowering spending..."

The White House spokesman is trying to keep expectations for today's meeting low - probably a good idea in light of what the Republicans had to say in their op-ed in today's paper.

On CBS' "The Early Show" this morning, Rep. Eric Cantor (soon to be the new House Majority Leader), said of today's meeting that he was "hopeful that we can all get together this morning and try and drive towards producing results for the American people."

Cantor said that the voters' message on November 2 was that more had to be done to address unemployment and job creation. "And one of the biggest hurdles to seeing that happen right now is the uncertainty surrounding the fact that tax rates are going to go up on everybody in just a few weeks if we don't act here in Washington.

"So I'm hopeful that we're going to come together to try and resolve that issue right up front," he told anchor Harry Smith.

Smith asked Cantor if there was any "wiggle room" on the Republican side, after the White House said they were on board with extending the lower tax rates for all except the very top income earners.

"We're not going to agree with [President Obama] on everything," Cantor said. "But there is one thing that I do think we can come together on, and that's the fact that we have got a stubborn unemployment rate that is hovering around 10%. We've got to bring that back down, and right now, the best thing to do is to make sure that no one gets a tax hike while we're trying to see more jobs created in the private sector.

"So, hopefully we'll see a president that is responsive to the people that spoke on November 2. He can join us, and we can make sure now we go forward with an economy that's got, you know, 'all systems go' as far as trying to get more jobs."

[Republicans who say extending the Bush tax cuts for the wealthiest Americans - which critics say will cost American taxpayers $700 billion over the next decade - claim that giving back to the rich will spur job creation. Analysis of unemployment from the past decade, however, shows that President Bush's cutting of tax rates on the wealthy preceded massive job losses, not job creation.

And in response to GOP claims that 750,000 small businesses will be hurt by allowing the top tax rates to expire, the Washington Post reports, "Less than 2 percent of tax returns reporting small-business income are filed by taxpayers in the top two income brackets."]

When asked if Mr. Obama's announcement yesterday that federal wages would be frozen for the next two years was a step in the right direction (in terms of compromise with Republicans), Cantor said, "Well, absolutely. That's the kind of, you know, position and cooperation that we've been asking for. This is an idea of freezing federal pay that the Republicans put forward back in May, and so we embrace that.

"Certainly I know that the American people feel that the federal government has grown entirely too big, and the pay scales need to be brought down back to match the market rates in the private sector."

Cantor may be referencing a recent USA Today study of Bureau of Economic Analysis data which showed federal civilian employees have seen their compensation rise in the past decade, to more than double what private sector workers earn.

The libertarian Cato Institute defines the $240 billion total in federal wages and benefits paid in 2009 as, "That's $240 billion in economic resources extracted from the private sector."

Public employee unions say the growing gap in compensation represents not government largesse but pruning, since over the past decade many lower-paying, lower-skilled government jobs have been contracted out to the private sector.