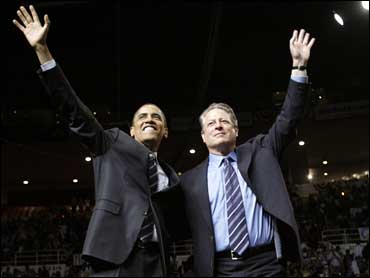 "The time for delay is over, the time for denial is over," Obama told reporters after the meeting, in reference to climate change.

"We all believe what the scientists have been telling us for years now, that this is a matter of urgency and national security, and it has to be dealt with in a serious way," Obama added. "That is what I intend my administration to do."

Gore sought the presidency in 2000 but lost to then-Texas Gov. George W. Bush in a disputed election that was settled in the Supreme Court. He then became a leader in the movement to draw attention to the issue of climate change and global warming. He won the Nobel Peace Prize in 2007, and his documentary "An Inconvenient Truth" won an Academy Award the same year.

Obama has pledged to use part of his proposed economic stimulus package to develop alternative energies and "green" technologies. Obama's aides said the private meeting would help shape the president-elect's economic policies.

The former vice president endorsed Obama in June, shortly after he clinched the nomination after a long primary battle with Hillary Rodham Clinton. Gore was vice president under President Bill Clinton.

Gore's spokeswoman says the former vice president is not seeking an official position in Obama's administration.